Odd Child Out by Gilly Macmillan 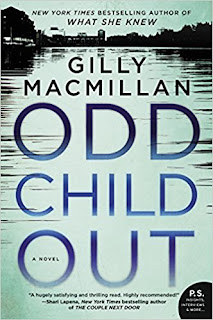 Odd Child Out by Gilly Macmillan is the second in the Jim Clemo detective series. Here's a quick link to my review of the first Jim Clemo book:

If you click through that link you'll find that I didn't fall in love with What She Knew, but I found it memorable enough that I wanted to read the next in the series and I'm glad I made that decision.

Noah Sadler has been fighting cancer for many years and now he's losing the battle. His best friend, Abdi Mahad, has been the one constant companion in his life who doesn't let the illness get in the way of their friendship. But, when Noah is found floating in Bristol canal and Abdi is unable or unwilling to answer any questions about what happened, he comes under suspicion. Did Abdi push Noah into the canal? If so, why? If not, what exactly happened?

Detective Inspector Jim Clemo is back on the job after a bit of a breakdown led to mandatory leave. Noah's case is the first one he's been given and he's determined to get it right. But, the more he learns, the more convoluted and confusing the case becomes. What does a photograph taken by Noah's father have to do with Abdi? Did it have anything to do with Noah ending up in the canal? Does Abdi's Somalian background have anything to do with what's happened, the friendship, his behavior? Noah's mother is suspicious of Abdi, but is she merely prejudiced?

I found Odd Child Out utterly gripping but also a difficult read. Gilly Macmillan is hard on young characters. You do know at the outset that Noah Sadler is going to die, but you don't know if he'll recover from his near-drowning in the canal and then die of his long-term illness and the author actually puts you in Noah's point-of-view, at times.

While Detective Clemo and his partner are trying to get to the bottom of what happened, the story of a Somalian man in the photograph taken by Noah's father unfolds and, toward the end, there are some heart-pounding scenes when the strands finally wind together. While I don't remember what exactly caused Jim Clemo to break down in the first book, I found him likable and enjoyed reading about his troubled background in this second book. He's turning out to be a more interesting and complex character than I initially suspected, so I'm looking forward to future books in this series.

Highly recommended - Painful as it is to know that a character is going to die, regardless of how the case turns out, Odd Child Out is suspenseful and the pages absolutely flew. I enjoyed it immensely and found the heart-pounding scenes toward the end of Odd Child Out incredibly satisfying. I did figure out one strand that I think was supposed to be surprising (which is not unusual) but it was not enough to give away the most important piece of the puzzle. This is a page turner, in my humble opinion.

©2018 Nancy Horner. All rights reserved. If you are reading this post at a site other than Bookfoolery or its RSS feed, you are reading a stolen feed. Email bookfoolery@gmail.com for written permission to reproduce text or photos.
Posted by Bookfool at 4:42 PM