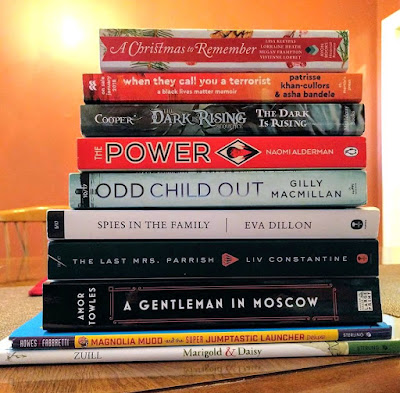 I have some catch-up posting to do, thanks to the holiday season, so I've only reviewed two of my December reads and will start tackling the rest as soon as possible.

December reads (with links, if applicable - to be updated as I review):

118. When They Call You a Terrorist by Patrisse Kahn-Cullors and Asha Bandele - The memoir of one of the founders of the Black Lives Matter movement describes what it was like growing up black and targeted by police, the challenges of living with a mentally ill brother, and how she became an activist. Harrowing and very important reading.

120. Spies in the Family by Eva Dillon - Part memoir, part Cold War spy story, Dillon weaves together tales from her childhood with the story of how the CIA turned a particularly valuable spy for the Soviets into an asset. I found this book utterly fascinating. Dillon's father was the Russian spy's handler.

121. The Last Mrs. Parrish by Liv Constantine - Amber wants to be wealthy, has chosen a target, and buddies up to his wife, intending to take her place. But, the Parrish marriage is not quite what it seems.  Clever, but I found the dialogue awkward and did not love this book.

122. The Power by Naomi Alderman - When teenage girls develop the ability to channel the natural electricity in their bodies and train older women to do the same, men suddenly lose their power over women. I loved the first 100 pages of this book but I didn't feel like it fulfilled its potential.

123. The Dark is Rising by Susan Cooper - The second book in the Dark is Rising sequence, purchased for a read-along on Twitter. Classic good versus evil. Maybe a bit more magical if you read it while young. I wanted it to be a little less vague while participants who read it as children liked the fact that the author "gave the reader space to imagine".

124. A Gentleman in Moscow by Amor Towles - The story of a Russian count's life after he's confined to a hotel following the Russian Revolution. A delicious read with wonderful characters. My favorite of both the month and the entire year.

125. Magnolia Mudd and the Super Jumptastic Launcher Deluxe by K. Howes and V. Fabbretti - A young inventor is disappointed when her uncle and inventing partner announces that he's getting married and they want her to be their flower girl. A Girl Power kind of picture book.

126. Marigold and Daisy by Andrea Zuill - When a young snail gets a new sibling, she's annoyed by all the attention the little one gets. But, then something happens to turn the tables. The second picture book I've read by Andrea Zuill. I love her illustrations.

127. Walkabout by James Vance Marshall (e-book) - A modern classic about two American children who decide to walk to Adelaide after their plane crashes and how they're saved by a young Aborigine who teaches them how to survive in the Outback. A quick, entertaining survival story.

128. Odd Child Out by Gilly Macmillan -  Two teenage best friends in Bristol, England, one dying of cancer and the other a Somali immigrant, sneak out at night and one nearly drowns in a canal. The other refuses to speak. Was it a crime or an accident? The second in the DI Clemo series, fast-paced and hard to put down.

Favorites of the month were A Gentleman in Moscow, A Christmas to Remember, Spies in the Family, Walkabout, and Odd Child Out (which was a big improvement over the first book in the series, in my humble opinion).

I can't really say I liked When They Call You a Terrorist because it's a harrowing read, but it's the kind of book that people need to read because it tackles so many topics: systemic racism, mental health, poverty, funding prisons rather than social programs to prevent imprisonment.

I liked The Dark is Rising but didn't love it and both picture books are good but Magnolia Mudd has a better story than illustrations and I liked the illustrations better than the storyline Marigold and Daisy.

The Power and The Last Mrs. Parrish were both disappointing. So much hype around them. I liked the uniqueness of The Power, but only really found it gripping for the first 100 pages, then I thought it went downhill. And, The Last Mrs. Parrish was clever but the dialogue was so clunky and unconvincing that I was never able to suspend disbelief.

So, December was a pretty good month with mostly books that I liked or loved, two disappointments, and no DNFs. How was your reading month?


©2018 Nancy Horner. All rights reserved. If you are reading this post at a site other than Bookfoolery or its RSS feed, you are reading a stolen feed. Email bookfoolery@gmail.com for written permission to reproduce text or photos.
Posted by Bookfool at 1:48 PM