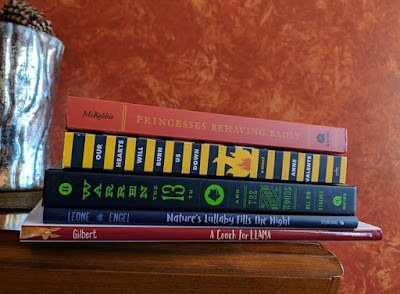 
So . . . this isn't actually everything that walked in my door, last week. Remember that local bookstore that was closing? They decided to extend their sale for a few extra days and marked everything to 90% off. It took me a day of fighting with myself before I went in to see if there was anything left worth buying and it was fascinating - chaotic, because there were still a lot of books and about half of them were in boxes. Some of the books were boxed in anticipation of being moved to the antique store across the street, some boxed by people who were buying them (I avoided the boxes). Most of the bookshelves in the store had been sold and hauled away by their new owners, so there were also books lined up on the floor and only a few scattered shelves of books remaining. While I was there, a woman bought a mirror off the wall. At any rate, there were quite a few books left, so I managed to find another embarrassingly nice little pile. Want to see them? If so, tell me and I'll add them to next week's pile. I just didn't feel like grabbing them for today's photograph.


I was glad to finish The Radium Girls because it was so, so sad. But, I'm also happy to have read it. It was certainly a good reminder of how deceitful a company can be when its owners fear they'll lose money - even to the point of knowingly continuing to expose its employees to deadly radiation when they knew it was killing people. The two middle books are children's books from last week's arrivals and I'm looking forward to reviewing them. I loved them both. Artemis is a book I borrowed from my youngest son and read hurriedly, in case he had the urge to snatch it back. I will try diligently to work on getting caught up, this week, so I can review some of these books soon!


After Tuesday, I had a headache for several days and I am still fighting to get my prescription for migraine meds filled, so it was not the best week for writing. But, I'm happy that I managed to get three posts published. Hopefully, this will be a better week.


Those of you who enjoyed The Dry (which I have not yet reviewed but found gripping) will be happy to know that I'm having an equally hard time putting down Force of Nature.

January isn't even over and I've read 16 books. That's pretty typical for a January (usually, my biggest reading month) but, wow, does a good reading month throw the book reviewing behind! Fortunately, not all of the books I've read have been from publishers, so I'll be able to whip out a few mini reviews.

TV-wise, we've just subscribed to Brit Box channel for Roku (we haven't had cable or satellite service for something on the order of 16 years - also have never subscribed to Netflix, believe it or not) and discovered that they have Doctor Who episodes all the way back to the very first Doctor! Cool! Some of the early episodes are missing (I know I read that somewhere, but I'd forgotten) and the pacing of a show from the Sixties is remarkably slow. But, we're enjoying watching from the beginning for the historical context. I had no idea the Daleks had been around practically since Day 1! We're also watching a travel show starring Robson Green, in which he travels around the English Coast.

Movie-wise, I really, really want to see The Darkest Hour but for some reason we never seem to manage to talk ourselves into going to the theater. We always end up dragging our feet and then having to wait for movies to show up on some streaming site or on DVD. If you've seen it, tell me what you think of it, please!

©2018 Nancy Horner. All rights reserved. If you are reading this post at a site other than Bookfoolery or its RSS feed, you are reading a stolen feed. Email bookfoolery@gmail.com for written permission to reproduce text or photos.
Posted by Bookfool at 3:43 PM