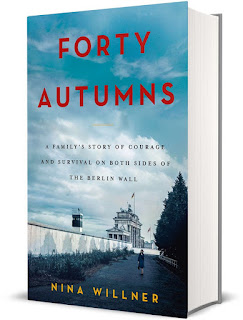 
I was five years old when I learned that my grandmother lived behind a curtain.

Forty Autumns: A Family's Story of Courage and Survival on Both Sides of the Berlin Wall by Nina Willner is the story of a large German family, from just after the end of WWII to the present day, with emphasis on the four decades that the family was split apart by the Iron Curtain.

Only one child in the family managed to escape East Germany and it took her three attempts. While Hanna got a job in the West and was able to advance at work and eventually marry and move to the United States, the rest of her family lived through hardship and desperation, often hungry, standing in line for hours to obtain necessities, always in danger of being arrested if a neighbor or friend suspected them of saying or doing something subversive against the government. The author, Nina Willner, is one of Hanna's children.

The book begins with the end of WWII in 1945 and the division of Berlin. While families waited for the men to come home, American, British, and Soviet troops divided Germany. There were rumors of atrocities committed by the Soviets, so when the American troops pulled out of the area where Hanna's family lived, some German citizens either left with the soldiers or tried to send their daughters away.

The reality of Soviet occupation and what was to come was immediate. Everyone was told they must turn in all their food to be equally divided and anyone who hid food would be shot. But, the food was never divided and redistributed as promised, so the Soviets brought hunger. That was just the beginning of life in East Germany. Forty Autumns is a well-rounded family biography that takes you through the entire 40 years, till the family was finally reunited after the fall of the Berlin Wall, including the years that the author worked as a U.S. Army intelligence officer serving in Berlin during the Cold War. There are some tense scenes in which she describes various missions into East Berlin.

Highly Recommended - History buffs and fans of memoir, particularly anyone with a fascination for the Cold War, will enjoy this meticulously researched story of a single family in which the author compares and contrasts life behind and outside the Berlin Wall. Included are maps, a Family and Historical Chronology (a comparative timeline that shows what was happening historically and within the author's family), photographs, and epilogue describing what's happened since the fall of the wall, an extensive bibliography, and index.


©2018 Nancy Horner. All rights reserved. If you are reading this post at a site other than Bookfoolery or its RSS feed, you are reading a stolen feed. Email bookfoolery@gmail.com for written permission to reproduce text or photos.
Posted by Bookfool at 2:11 PM