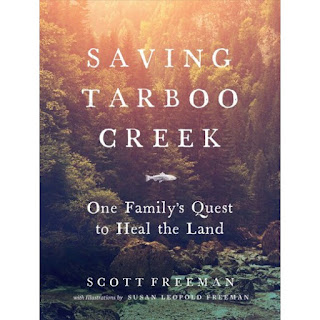 The idea that any organism lives and acts independently of others is a myth. The realization that all organisms are connected is a profound insight.

~fr. p. 175 of Advance Reader Copy, Saving Tarboo Creek (some changes may have been made to the final print version)

Saving Tarboo Creek: One Family's Quest to Heal the Land by Scott Freeman is about how the author and his family purchased a damaged plot of land and set about restoring it to bring back the plants and animals that once made it a healthy environment, including restructuring the original creek to make it a safe place for salmon to breed.

The author's bio is worth mentioning as it shows his expertise, which is important to those who might be skeptical when he talks about such things as climate change:

"Scott Freeman worked in environmental education and international conservation before completing a PhD in evolutionary biology at the University of Washington." He is married to the granddaughter of Aldo Leopold, author of the conservation classic A Sand County Almanac (click through to visit The Aldo Leopold Foundation) and wife Susan Leopold Freeman illustrated the book. Here's an interior view I located online to give you an idea of the illustrations: 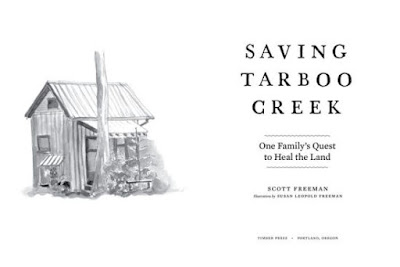 The intro to Saving Tarboo Creek is strongly worded as it talks about the dangers of our current administration to our land, including the effect of policies ignoring climate change, although the text of the book is directed more at the history of that particular plot of land and the process of restoration (and what's involved in restoration, in general). It occasionally feels a bit like the author is giving you a college lecture -- in a good way; I felt like reading Saving Tarboo Creek was a learning experience. Freeman speaks from an expert viewpoint, both as a scientist and a person who married into a family in which observation of nature was simply a way of life. Toward the end of the book, he mentions one of the children of Aldo Leopold and how she recorded her observations of the changing climate over the span of many decades. The Leopold family is unusually connected to the land.

But, let's back up a bit. Saving Tarboo Creek will teach you a few interesting lessons about conservation, in general, and some fascinating history but it's specifically about a plot of land in Washington. Freeman purchased this piece of land knowing it was damaged. Trees had been harvested by past owners without any thought to replanting and a former creek had all but disappeared, no longer welcoming to the animals it would have hosted in the last century after decades of abuse. After buying the land, the family went about determining which trees and plants were original to the land (some of that involved intelligent guesswork, some of it viewing the original tree stumps) and then hired someone to dig out the creek and restructure it so that there would be a strong current in some places, quieter, sheltered water in others. He also balanced the replanting of original plants with others he thought more likely to survive the altered climate.

I can't recall what he called the planting sessions -- plantathons? (it's been a few weeks since I read the book) -- but I found one story particularly interesting. In order to fully plant the land, which was a huge job done in sections, the family needed a lot of help, so they got volunteers to join in on huge planting sessions and there was one particular area where the trees kept dying. After the first year, the author assumed the volunteers may have not known how to go about planting those trees properly and thus the die-off was caused by planting error. But, then it happened for a second and third year. Further investigation led to the realization that the soil in that particular area was not what he expected. It was clay that trapped water and was drowning trees that were intended for a drier area. The land was replanted successfully with trees that prefer wet roots.

Highly recommended, particularly to lovers of nature and science. There were a few scattered pages where the biological aspect of flora and fauna got a little too technical for me, but I found Saving Tarboo Creek absolutely fascinating. It was my first read of the year and a terrific way to start the reading year.

I received an advance review copy of Saving Tarboo Creek from Timber Press (via Shelf Awareness, in exchange for an unbiased review) and Yoohoo! I'd love to read more of your books, if you're listening, Timber Press people! Closet environmental fanatic, here.


©2018 Nancy Horner. All rights reserved. If you are reading this post at a site other than Bookfoolery or its RSS feed, you are reading a stolen feed. Email bookfoolery@gmail.com for written permission to reproduce text or photos.
Posted by Bookfool at 3:43 PM