Marigold and Daisy by Andrea Zuill 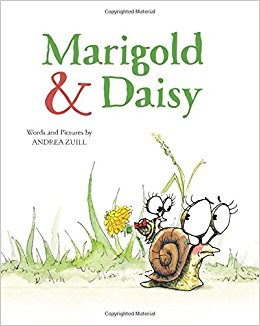 Marigold and Daisy is the second book I've read that's both written and illustrated by Andrea Zuill. I'll add a link to the first book in a sec.

Marigold had a good life. And, then her little sister arrived (first as an egg, then a snail). Daisy was adorable. In fact, the other creatures were charmed by everything about her: her swirly shell, her size, her poop (yes, her poop)! Marigold tried to talk to her Dad about Daisy but he just didn't get it. Daisy was, Marigold decided, an evil genius who had set out to conquer the world by being adorable.

Then, things got worse. Daisy started following Marigold around, invading Marigold's personal space, singing loudly. She even tore up Marigold's favorite toy. That was enough to set Marigold on edge. "I'm out of here," Marigold said.

While munching on a flower, she complained about little Daisy and ended up getting chewed out by a bee. "Hey, Slimy! This flower is mine! Quit munching on it!" the bee shouted.

Amazingly, Daisy came to Marigold's defense and chased the bee away. Now, Marigold and Daisy got along just fine. And, then one day they were called to see their new brothers.

Recommended - I liked Marigold and Daisy better, the more I read it. It's a cute story that does a good job of showing that, yes, a new sibling can be really annoying. But, sometimes a little brother or sister can turn out to be terrific at the least expected moment. My eldest might have appreciated this book, a couple decades ago, when Kiddo came along and everyone thought he was adorable except the big brother whose toys Kiddo kept stealing. A sweet story and I'm particularly fond of Zuill's color-on-white illustrations.

Another book that I reviewed by the same author/illustrator:

Dance is for Everyone by Andrea Zuill


©2018 Nancy Horner. All rights reserved. If you are reading this post at a site other than Bookfoolery or its RSS feed, you are reading a stolen feed. Email bookfoolery@gmail.com for written permission to reproduce text or photos.
Posted by Bookfool at 3:05 PM