The Dark is Rising by Susan Cooper 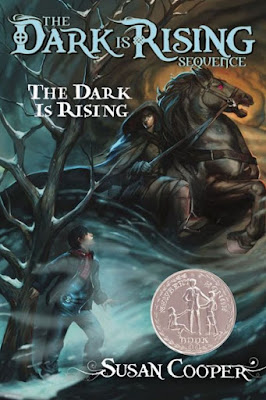 The Dark is Rising by Susan Cooper is a book I've intended to read for ages. It was a read-along on Twitter, hosted by author Robert Macfarlane, that convinced me to go ahead and acquire a copy. I thought it would be fun to read with a group, to check out other people's thoughts, since this particular book is apparently up there with my favorite, A Wrinkle in Time by Madeleine L'Engle, as a stand-out childhood read that really means something to people.

I did not even hear about this particular series - the Dark is Rising Sequence - until maybe 10 or 15 years ago. It never even came onto my radar till then (although I would have been the perfect age for it in 1974), so I missed out entirely on the possibility of reading it as a child or young adult.

It wasn't till I opened the book that I realized it's the second book in the sequence. However, the author indicated that the stories each have a different focus so the hero, Will Stanton, is not in the first book. Interesting. At any rate, Will is an 11-year-old who finds out he's an "Old One" in charge of gathering a set of 6 signs (round disks of different materials). As a Seeker of Signs and an Old One, he is preparing for the ultimate battle between Dark and Light.

The writing in The Dark is Rising is lovely but at times inscrutable. I was a little relieved to find that friends who've written their thoughts at Goodreads felt the same. "Wouldn't it have been difficult for a child to understand?" friends and I wondered. It turns out the opposite is true, at least judging from the replies to Robert Macfarlane's first questions -- about the atmosphere, how one felt while reading, whether those who read while young remember where they were, the weather, how they came to read it. As broad as that sounds, those who read it as a child almost all had vivid memories of their first reading. They remembered where they were, whether it was given to them by a relative, found on a shelf, or a librarian encouraged them to check it out, whether they curled up by a fire or on a tall bed to read, whether it was raining or snowing or sunny - the kind of things you only remember when you've had a really meaningful experience.

As to whether or not they understood it as children - most definitely. It was mostly those of us who were reading it for the first time as adults who had difficulty understanding what was going on. One of the people who read it as a child expressed a feeling opposite to my sense that I needed more details to explain to me what was happening. Her opinion: "I liked the way the author gave the reader space to imagine." Ooooh. I know that feeling.

I'm not going to bother with a recommendation. The Dark is Rising Sequence is a fantasy series and you either like fantasy or you don't. I'm iffy. Sometimes I love it, sometimes it loses me. This story was a little of both. There were times I felt completely lost. And, then something would happen or some bit of dialogue would set me straight and I lost that sense of everything swirling around me and things came into focus, at least for a time. It certainly was a unique experience. But, it was not one that was so profoundly moving that I'd rush out to buy the rest of the series. Still, I'm glad I joined in. I didn't say anything; I just read as many of the responses as I could on the first day and that was enough to satisfy my curiosity about how others felt. I knew, at that point, that I could never look at it from the innocent viewpoint of a child but that I could at least enjoy knowing how others felt and what I got out of it, myself. There are definitely some vivid scenes that will stick with me for a long time.

©2018 Nancy Horner. All rights reserved. If you are reading this post at a site other than Bookfoolery or its RSS feed, you are reading a stolen feed. Email bookfoolery@gmail.com for written permission to reproduce text or photos.
Posted by Bookfool at 2:30 PM