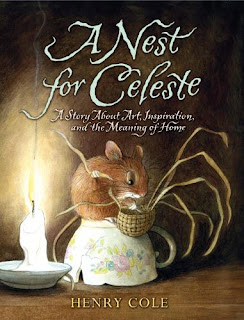 A Nest for Celeste begins Celeste's story. Celeste is a mouse who has lost her family in a tragic accident. Alone, she's found her way to a plantation home and made herself a nice little room behind the floorboards, where she makes baskets from salvaged bits of dried grasses, wildflowers, and strands of colored thread. Now and then, she goes on a journey to the dining room to collect food dropped by the human inhabitants of the house. There are two vicious rats and a house cat, among other dangers.

Joseph is learning his master's art, drawing bird illustrations, while Mr. Audubon is instructing young Eliza Pirrie in dancing, drawing and painting. While Mr. Audubon teaches, hunts, and mounts the birds for his illustrations, Joseph practices drawing. After Celeste has a close call with the cat, Joseph discovers she's made a home for herself in his boot. He's always wanted a pet mouse, so he carries Celeste around in his pocket, talking to her throughout the day (although the author does not go so far as to let the human and mouse communicate with each other). But, even with Joseph to protect her, Celeste keeps getting into all sorts of binds. Will Celeste ever find a home?

I had such mixed feelings about A Nest for Celeste that I'm not sure whether or not I'd recommend it, although I think children can handle a lot more than we often give them credit for. Still, some of the things Celeste sees and experiences in this story (which is tangentially a view into John Audubon's world) are harsh. She sees one of the rats being killed by the house cat, just after being taunted by them, views a massive pigeon hunt in which thousands of birds are killed, and witnesses the slow death of an ivory-billed woodpecker after he's shot by Audubon to pin up, as if in flight, for illustration purposes. Adults will probably be aware that both the pigeons and the woodpeckers mentioned in the story have become extinct and that there's a message in each of these plot points.

There are also plenty of adventurous moments in A Nest for Celeste. I particularly enjoyed her friendship with an osprey who takes her for a ride in one of her baskets when she's in need of help, and a thrush who keeps her company in Joseph's room. Eventually, Celeste finds a safe and comfortable home in the attic, living in a dollhouse.

Iffy on recommendation - I'd recommend finding a copy through your library and reading it, before buying for your children. If you think it's not to scary and that the adventure offsets the violent bits, great. The illustrations are beautiful and look very much like Brian Selznick's illustrations. By the end of the book, I was glad I followed Celeste on her adventures but the first half of the book shocked me so much that I was surprised how pleasantly the book ended. 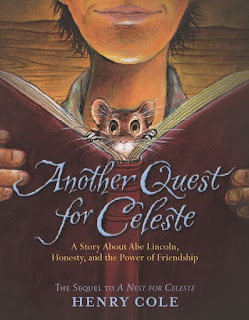 Another Quest for Celeste takes Celeste on an unexpected journey. After spending some time living in her dollhouse home in the attic of a plantation house, Celeste makes the mistake of falling asleep in a bale of cotton when she goes to fetch some food outdoors. The cotton is in a cart and the cart goes to the Mississippi River, where it's put on a steamship. Thus begins another adventure that leads Celeste from the steamship, where she is befriended by a kind old dog, to a forest, where she meets a delightful squirrel couple and settles down temporarily, to the log cabin home of young Abraham Lincoln.

There are a few really frightening moments that are in the same vein as those in A Nest for Celeste (the steamship sinks, a tree with a nest is felled) but the dangerous moments were, I thought, much milder in Another Quest for Celeste and her experience with young Abe Lincoln gives you a better feel for the historical aspect than the first book. You learn about Abe's passion for books and reading, what his home life was like, and his integrity when a borrowed book becomes soaked after a roof leaks during a storm. An author's note at the end of the book adds to the historical perspective.

Abe is kind to Celeste and she enlists her friends to help him out when he must work to replace the damaged book. And, then Celeste eventually returns to life in the forest. Although at the beginning of the book she yearns to return to her attic dollhouse, by the end she realizes she has found a happy new home, surrounded by friendship, in the forest.

Recommended - A much sweeter story, shorter, more focused on the history and friendship, I thought, than its predecessor, I really enjoyed Another Quest for Celeste. Both books are for elementary level, I'd say 3rd to 5th grade, depending on the child.


©2018 Nancy Horner. All rights reserved. If you are reading this post at a site other than Bookfoolery or its RSS feed, you are reading a stolen feed. Email bookfoolery@gmail.com for written permission to reproduce text or photos.
Posted by Bookfool at 6:55 PM