Minis: Al Franken, Giant of the Senate by Franken and The Hate U Give by Angie Thomas

I've decided I'm going to do several sets of mini reviews to get myself caught up (again) since a good portion of the books I have left to review are from my personal stacks. Any books from publishers will get separate, full reviews. 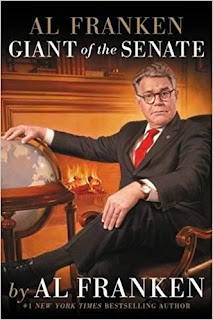 I ordered Al Franken, Giant of the Senate because I figured it would be a funny book about life in the Senate and I've liked Al for as long as I can remember. Boy, was I surprised. Al Franken, Giant of the Senate is more than I could have imagined. It's funny, yes, but it's also educational. Rather than just describing his senate years, Franken goes back to his early life and explains how and why he became a liberal, a satirist (he prefers "satirist" over "comedian"), a Harvard grad, and a senator, his difficult entry into politics, and the challenges he faced specifically because of his background in show business.

The only things I really knew about Franken as a senator (as opposed to Franken the satirist) before reading Al Franken, Giant of the Senate, were the facts that he's a Democrat and that he asked by far the best questions of any senator when he vetted people for cabinet seats in the current administration. I'd paid little attention to him, otherwise, but I was definitely impressed at the precision of what he asked and the clear knowledge and/or research behind his questions. And, it turns out there's good reason for his amazing questioning skills: Al Franken did his research.

By the time I read Al Franken, Giant of the Senate, Franken had already been forced out of the Senate by female senators who ganged up on him without granting him the investigation he was willing to go through and deserved. So, it was particularly interesting to read about the ways he had to defend himself in the past, the challenge of trying to get the Democratic party to endorse him, the vetting he submitted to in order to make sure that nothing like what ended his career in the Senate would happen, and the sacrifices of Franken and his family to do a job that he felt driven to do because of his passion to help others. I never believed he got a fair shake, in the end, and I'm doubly convinced after reading his story; but, I do believe I understand why he gave up so easily. Al Franken was one of those rare politicians who was in it for his constituents, not to make himself piles of money. An excellent book, highly recommended. I'd like to go back and read some of his older books, when I have the time. 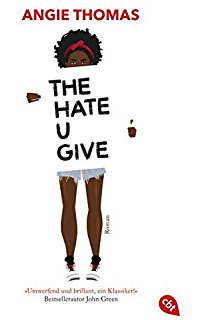 The Hate U Give by Angie Thomas is a book I read with an online book group. Seemingly everyone else on the planet has read and reviewed the book, so I feel like I'm a little late to the ballgame and I liked it perhaps a bit less than most, but it's a powerful story that I'm very glad I read.

16-year-old Starr lives in an impoverished neighborhood but attends a school in an upscale part of town, so she's learned to shift between the two worlds. On her home turf, she speaks the dialect of those around her; in school, she softens her language to match that of her fellow students. Putting on a different front at school takes effort, but it becomes even harder to hide her true feelings and self after an old friend is killed by a police officer when the officer mistakes the handle of a hairbrush for a gun. Starr is in the car when he's shot and sees him die.

Shocked by her experience, Starr does everything she can to see justice served but is stunned to find that nobody takes her seriously. Is there anything Starr can do to change the outcome and prevent more of the same, or will Starr's childhood friend always be known as just another drug-dealing black guy who made the wrong move, even though he did nothing wrong?

I thought The Hate U Give was excellent, powerful, important, and necessary. I only had one real problem with it and that was the vernacular. I did try to look up some of the words and expressions that I didn't know but was unable to find all of them. In general, I tend to really dislike books that are written in dialect. But, it was crucial to Starr's character to show the two sides of her. So, I looked up what I could and guessed at other words. Fortunately, I was eventually able to ask around and find out the meaning of the words I was unable to locate definitions for online. But, not knowing while I read frustrated me and that's why I gave the book 4 stars. Still . . . an emotional read that is truly of the moment. The Hate U Give shines a light on a uniquely American problem.

I read The Hate U Give electronically, so it won't appear on my stack of February reads when I get around to posting my Month in Review (running late on that, clearly). It was a good one to read for discussion because of both the difficulty I had with the lingo and the fact that the people in my discussion group had a lot of unique insight to contribute. I really appreciated reading other viewpoints. Recommended.


©2018 Nancy Horner. All rights reserved. If you are reading this post at a site other than Bookfoolery or its RSS feed, you are reading a stolen feed. Email bookfoolery@gmail.com for written permission to reproduce text or photos.
Posted by Bookfool at 10:00 AM