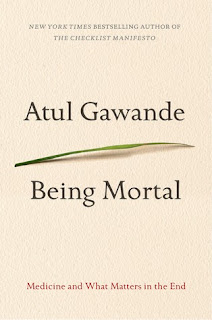 I ordered a copy of Being Mortal: Medicine and What Matters in the End by Atul Gawande on a bit of a whim after reading Al Franken's repeated exhortations about what a great guy Gawande is in Al Franken, Giant of the Senate. I'd heard of it but I don't believe I read any reviews of Being Mortal before I ordered it. As it turned out, the book was perfect for the moment in which I read it.

Atul Gawande is a physician who has slowly come to the realization that we make a mess of end-of-life care and decision-making and shares what he has learned and experienced. He talks about the different ways of handling the care of elders in decline, including a variety of approaches from allowing the elderly to make their own decisions and lock their doors -- even if it means they're shortening their own lives by continuing to do such things as eat unhealthy foods -- to the opposite extreme of nursing home care in which the elderly are confined, and various experiments and options in between, such as a nursing home with pets for the seniors to care for.

Gawande also talks about how important it is for those who are aging and/or dying to be able to decide what is most important to them as they approach their dying days. Throughout the book, he gradually tells the story of his own father's years with a slow-growing cancer and both the mistakes and wise decisions that were made.

Highly recommended - Being Mortal is a book I think absolutely everyone should read at some point, whether one is reading from the perspective of a caregiver or that of an older person who wants to be informed about end-of-life decisions like choosing a place to live. We were in the process of losing a family member as I was reading the book and while I was not the caregiver in this particular case, it helped me in surprising ways and even was reassuring about how we handled my mother's death, almost 10 years ago. I'll probably end up rereading Being Mortal at least a couple times. Whether you have aging parents, a family member who is terminally ill, or just want to think about how to eventually handle major life decisions in the future, it's a book about something we'll all face and a valuable resource for helping one gain perspective about what the options are and the most important questions to ask. 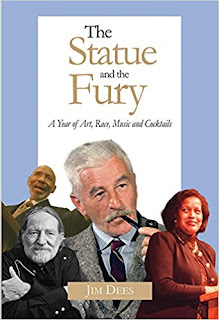 The Statue and the Fury: A Year of Art, Race, Music, and Cocktails by Jim Dees is about a year of life in Oxford, Mississippi during a time when a surprisingly controversial decision about whether or not to erect a statue of William Faulkner and where to put it had the residents of Oxford up in arms. Author Jim Dees was working for the local newspaper, during the time in question, and he describes various other happenings in the town, which at the time was still quite small (it's had quite a population explosion, in the past decade or so) and has been the host and a musician for the local radio show, Thacker Mountain Radio, for some time.

I read The Statue and the Fury for book group discussion in February but then missed the discussion because of a heavy thunderstorm (I live 30 miles from where my group meets, now), unfortunately. Both of my sons have degrees from the University of Mississippi in Oxford and one is back there, working on a second degree. So, we're familiar with the city, the statue in question, the bookstore, the radio show, and some of the local personalities. However, there were occasions when the author described various people and I had to dash off to look them up. And, the flow of the book is pretty rocky. It actually took me quite a while to realize the book wasn't a series of columns but a reflection on a specific year. The lack of flow confused me into thinking it was more of a collection of writings than a recollection of a specific time period.

Having said that, anyone who is passionate about William Faulkner's books will probably enjoy a peek into the crazy controversy about whether or not to put up a statue, the huge flap about a tree that was surreptitiously cut down during a time when tree-chopping was a little out of control, and the memories of Faulkner shared by various friends, relatives, and acquaintances of his. I particularly enjoyed finally finding out why there are two spellings of Faulkner (Falkner is the original spelling; Will or Bill, as he was known, added the "u") on the signs in Oxford. I particularly recommend The Statue and the Fury to Faulkner fans, Mississippians, and those who have lived in Oxford or visited the town. It's a bit disjointed -- not the best writing -- but a few of those small-town stories are worth the price of the book.

©2018 Nancy Horner. All rights reserved. If you are reading this post at a site other than Bookfoolery or its RSS feed, you are reading a stolen feed. Email bookfoolery@gmail.com for written permission to reproduce text or photos.
Posted by Bookfool at 12:30 PM