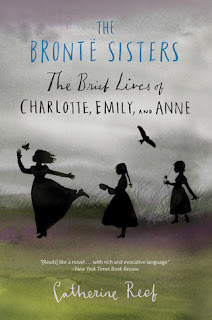 There were two books that helped break my February book slump: Our Native Bees and The Brontë Sisters. It was at my worst moment, when I could absolutely not bear to read another word of anything with a bookmark in it, that I decided to just let something call to me. I'd been glancing at The Brontë Sisters for days, by that point. It's an ARC that I got at my former library, back in the days when I'd occasionally drop by and find that they'd set out a cart full of ARCs for anyone to take, free of charge. I happened across my copy while doing a book purge and set it at the top of a bedside stack, thinking eventually I would get to it.

Then, I let it call out to me. The Brontë Sisters: The Brief Lives of Charlotte, Emily, and Anne, is a children's biography of the sisters, but I can't say what age it's geared toward, although I think a middle schooler could easily handle it. The Brontë Sisters is also certainly comprehensive enough for an adult to enjoy -- a read that can be quickly gobbled up in an afternoon but not one that's lacking in any way because it's geared to a younger crowd. The Brontë Sisters includes a nice range of photos of documents, paintings, and other memorabilia.

I am not, in fact, really a Brontë fan. I liked Jane Eyre but detested Wuthering Heights. And, that's the limit of my exposure to the Brontës. But, Catherine Reef describes the lives of the Brontës and the events that were occurring during the writing of each book, including the plots of the books, in a manner that intrigued me enough that I would have immediately picked up a Brontë book to read, had I not already written a list of books that I needed to read in the coming month. It's likely I'll return to the book to read whatever section happens to be about each title, when I eventually do read more Brontë works. Reef definitely gave me an appreciation of the stories that I lacked while I read the two. Recommended for readers who are intrigued with the tragic Brontë family and/or their books.

The Woman Next Door by Yewande Omotoso is a reread and I've already reviewed it (click on the title, above, to hop to my review) but I think it's worth mentioning the reread because it was quite a different experience. The first time I read The Woman Next Door, I did so because I wanted to read something set in South Africa before going on vacation there. The second time, I read it because I recommended it for discussion with my F2F book group.

What made the second reading different was the fact that this time I'd already been to South Africa. The Woman Next Door is set in a fictional neighborhood called Katterijn in Cape Town. It's about two elderly women who hate each other: one black, one white. But, there are some subtleties of characterization that you miss if you aren't familiar with Cape Town. I found that the book was even more enjoyable when I read it knowing the history of those areas.

Marion, the white woman who is racist but not self-aware, lived in District 6 for a short time, early in her life, for example. I had no idea what the significance of District 6 was, of course, having never been there when I first read it. But, while we were in Cape Town, we went on a tour that included the District 6 museum. District 6 was a part of Cape Town that was known for its diversity. A community that had attracted people from a large variety of races, backgrounds, and religions, the people of District 6 lived in blissful harmony till the Apartheid government kicked everyone out and plowed it down (unity being something that collided with the concept of control by minority, which is facilitated by division).

The area was an island unto itself. It wasn't necessary to go into Cape Town proper to buy groceries, go to school, or join in on activities. So, had Marion stayed in District 6, she undoubtedly would have grown up appreciating diversity. But, her parents were Jewish and escaped the Holocaust (this is more implied than stated), gave up their religion when they fled, and moved out of District 6 as quickly as they could. When Marion finally realizes how racist she is, it appears to startle her to think back on the fact that she was once a resident of the same neighborhood that spawned anti-Apartheid activists such as Nelson Mandela.

As to the discussion . . . it was fabulous. It's worth noting that I'm in a group in which the average age is probably about 20 years above mine (and I'm no spring chicken). A story about two elderly women, aged 88 and 82, with richly developed characterization was very much appreciated in that group. Only one of the women present disliked The Woman Next Door and she said her problem was the bitchiness of the characters. Well, there's no denying they're not pleasant people. But, there was purpose to their sharp tongues (they were wounded souls) and a meaning to their slow arrival at the realization that they were more alike than they could have imagined.

It's also notable that one of the group members observed the negative reviews at Goodreads appear to mostly have been written by younger women. Maybe it takes a bit of hard living and long years to truly appreciate the depth of meaning in The Woman Next Door. But, it definitely was a hit in my book group.

©2018 Nancy Horner. All rights reserved. If you are reading this post at a site other than Bookfoolery or its RSS feed, you are reading a stolen feed. Email bookfoolery@gmail.com for written permission to reproduce text or photos.
Posted by Bookfool at 3:30 PM