The Saboteur by Paul Kix 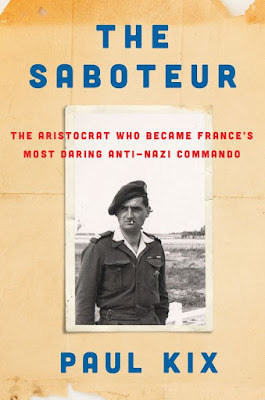 Subtitled "The Aristocrat Who Became France's Most Daring Anti-Nazi Commando", The Saboteur is the fascinating true World War II story of a courageous Frenchman. Robert de La Rochefoucauld was 16 when the Germans invaded France in 1940. From a window in his family's ancestral chateau, all but his father (who was serving in the French army) watched the bombing of nearby Soissons. The family escaped to the home of their grandmother, another huge ancestral home in the South of France, eventually returning to find that their roof was missing and Nazis had occupied the house. For a time, the family was forced to live side-by-side with Nazis and during this time, Robert listened to Charles de Gaulle's radio broadcasts from London.

Although Robert did not join the Resistance for a couple of years, he attempted to start up a band of his own to fight the Nazis and was denounced by an unknown party. Forced to leave home to survive, he hiked through the Pyranees mountain range with some British pilots, led by mountain men. After being led to Spain, La Rochefoucauld and the two pilots were promptly imprisoned. But, eventually, their release was secured and Robert ended up at his destination in London. There, he was trained by the SEO and then parachuted back into France to train Resistance members (then somewhat organized but not skilled) in the use of explosives and in combat. He was caught and imprisoned two more times and the escapes are worthy of movie treatment. These were what kept me going.

In between the exciting scenes of hiding explosives in loaves of bread and shoe heels, blowing things up, escaping from prison, and sneaking through town in a nun's habit are some lengthy descriptions of various Nazis, torture methods, and other details that are not quite as fast-paced or fun to read, although they do round out the picture. I was mostly in it for the exciting scenes and I wish some of them had not been skimmed over, although there's ample indication that the details simply weren't available to the author, as the subject himself was a man of few words who said little about the war till late in his life. You could say I wanted the novel, not the nonfiction. But, much as I craved the action scenes and found the other parts slow, I still thought The Saboteur a very good read and I'm glad to know about Robert de La Rochefoucauld.

Recommended - A solid work of nonfiction about one man's role in the French Resistance and his many daring escapades. While there were some details that could be a bit of a yawn to read, I think most of the background material in The Saboteur was necessary to paint a complete picture. And, even so, the duller background information is well worth reading to get to the edge-of-your-seat scenes, some of which are truly mind-blowing. Later in life, Robert de La Rochefoucauld inherited his family's title and became Count Robert de La Rochefoucauld.