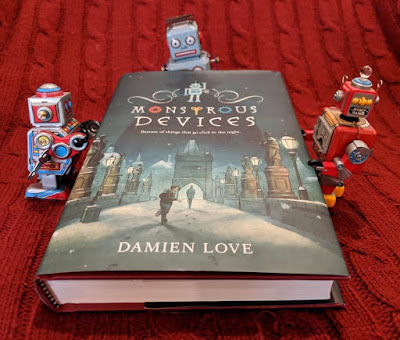 In Monstrous Devices by Damien Love, when Alex's grandfather sends him a robot, Alex is not surprised. He's been collecting robots for years. But, this one is different -- older, unique, even a bit creepy. And, it has a secret.

Alex's grandfather shows up in England shortly after Alex receives both the robot and an unexpected visit from two dangerous little robots that attack Alex. He'll have to miss a bit of the school term but it's almost over and Grandfather's in a hurry. So Alex quickly goes along with his Grandfather's scheme and they take the Chunnel train to Paris. There, they hope to stop a very bad man and his entourage, who use deadly robots to get what they want. As they travel, Grandad tells Alex stories, things that are are connected to the robot's secret, and bits of history that relate in some way. He tells him about the first robot ever made, in Prague, and the story of a missing robot, one of a set of three.

From England to Paris to Prague, Alex and his grandfather chase down clues, run and dodge dangerous flying robots, a man who can jump long distances, and two beefy bald men, as well as a little girl who has control of a large number of fliers (flying robots) with sharp edges and hooks. All are after the robot Grandad sent to Alex because only that robot can help them acquire something dangerous in the name of power.

Highly recommended - Monstrous Devices is an adventurous, riveting middle reader with so much action that I occasionally yearned for the slower chapters that served to allow this reader to catch her breath. It's exciting. Alex is bullied at the beginning of the book but by the afterword, he has come into his own. I enjoyed Alex's character arc and the lighthearted grandfather who always does something and then tells Alex, "You should never do this. Very unhealthy. Could get you killed." Grandfather made me smile. A nice blend of action, adventure, and humor.

Below the title it says, "Beware of things that go click in the night," in case you can't read the tiny print. 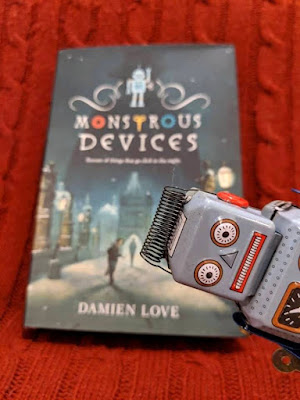 ©2018 Nancy Horner. All rights reserved. If you are reading this post at a site other than Bookfoolery or its RSS feed, you are reading a stolen feed. Email bookfoolery@gmail.com for written permission to reproduce text or photos.
Posted by Bookfool at 1:45 AM