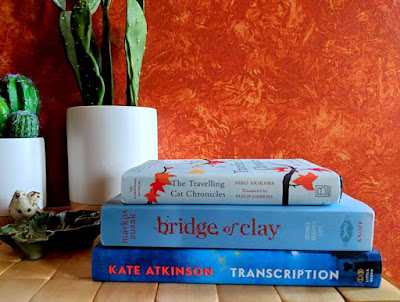 
This is a super exciting stack. I've been eagerly awaiting Transcription since I heard about it (it was a pre-order), had fingers crossed that I'd get a copy of Bridge of Clay when I requested an ARC, and am always excited about anything with cats in the title. Japanese Lit can be weird, unsettling, or thought-provoking, but sometimes it can be just flat beautiful. I'm hoping for the latter, but I don't mind an unsettling read, especially in the fall. The Travelling Cat Chronicles and Transcription have particularly beautiful covers: 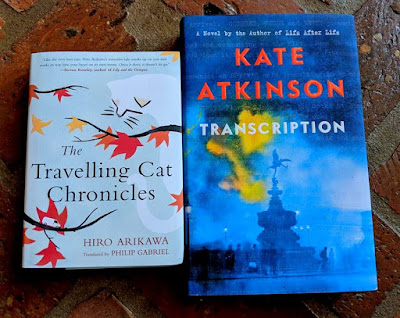 
Two of those were among my favorites of the month. It was so refreshing to sink into Simon's gorgeous, melodic prose. I love his short stories. Sons and Soldiers took me forever to get through but it was also a 5-star read, although a difficult one because it told stories of love and loss so vividly. You really get to know the young German men who escaped their home country without their families and then returned as American soldiers.


I am almost done with A Brown Man in Russia, which I didn't touch till last night because I was focusing on the other books. I'll finish that, tonight. The Kennedy Debutante is a fictionalized telling of Kathleen "Kick" Kennedy's time as a debutante in London. I'm not sure how far it goes in time. I really didn't know a thing about Kick, so I read up a little and discovered that she died quite young. It's nice, light reading after the heaviness of Sons and Soldiers, which starts with the horror of living as a Jew in 1930s Germany and ends with each man's discovery of what happened to his family.

We're on Season 7 of Doc Martin, I believe. Martin and Louisa have finally married. I keep thinking, "This is as far as we got, when we watched Doc Martin in the past. No, this is as far as we got." I'm just going to have to give up and admit I have no idea where we left off (the more recent seasons have only been viewed sporadically, so it makes sense that I don't know what we've viewed). At any rate, I'm glad they've finally gotten hitched.

I spent all of Thursday riveted to the TV and the rest of the time my focus has been on making it to the gym. In fact, I drove to the gym during a break in the Kavanaugh hearing and only missed a few minutes on the return home. The rest of the week was not a TV/movie week. And, the rock I'm painting, right now, is supposed to look like a kiwi slice on a purple background. I even dreamed about finding one of the local rock decorator's creations, last week. We have a local who decorates her rocks with moss, glitter, and little figurines, rather than painting them. They are so cool! I haven't gone looking for rocks, yet, but I'm hoping someday I'll find one of Savannah's rocks.

©2018 Nancy Horner. All rights reserved. If you are reading this post at a site other than Bookfoolery or its RSS feed, you are reading a stolen feed. Email bookfoolery@gmail.com for written permission to reproduce text or photos.
Posted by Bookfool at 12:28 PM