Seven Days of Us by Francesca Hornak 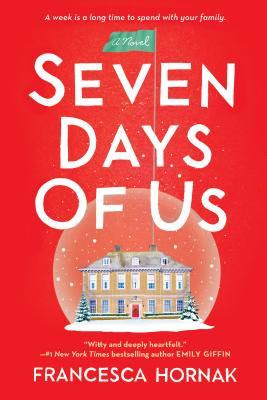 The Birch family is finally spending Christmas together, after years of doctor Olivia's far-flung travels keeping her away. But, the time together is a requirement as Olivia has been spent several months treating patients suffering from a dangerous illness in Liberia and she is obligated to spend a week in quarantine. The family will stay at the crumbling estate inherited from mother Emma's family, Weyfield Hall.

Andrew, the father of the family, is a restaurant critic who has never quite gotten over having to give up life as a war correspondent when his first child was born. He spends his days hiding in the smoking room, writing scathing reviews, and dithering about whether or not to reply to the young American man who wants to meet him . . . an unknown son, conceived during a single night of infidelity that he'd forgotten about till recently. Will Andrew reply to Jesse? When Jesse shows up in England, will he get a chance to meet his biological father or go home disappointed?

Emma has gotten some terrible health news but she doesn't want to ruin the holiday, so she's flitting about, keeping herself calm by feeding everyone, and only sharing her fears with her closest friend. She is happiest at her family's estate, shabby as it has become. Will Emma be able to keep her secret throughout the holiday?

Phoebe has just gotten a proposal from her boyfriend, finally, after years of dating. But, the ring is just so not her. While Phoebe spends her time flipping through wedding magazines and thinking through plans, the little things that she and her fiancé don't see eye-to-eye on are beginning to slowly pile up.  Is George even the right man for her?

And, Olivia has fallen in love but feels obligated to keep her relationship secret because she and the other doctor, Sean, have broken the critical "No-Touch" rule that keeps them safe from transferring the disease, should one of them fall ill. When Sean comes down with the deadly virus and becomes a national news story, Olivia becomes obsessed with the news, writing emails he won't see until he's out of danger, and blogging in defense of him. When Olivia begins to fall ill, what will happen? Will Sean survive?

As each of the Birch's little bubbles collide and two unexpected guests come crashing into their week of quarantine with no choice but to stay, the Birches find that they must face up to the necessity of listening to each other and breaking free from their own obsessions. In the process, they will also discover things they have in common and the importance of banding together.

Highly recommended - There was only one thing I truly disliked about Seven Days of Us. It's a spoiler, and it's a plot point that others might find tolerable because it is, in fact, realistic. Otherwise, I absolutely loved Seven Days of Us. It is a little on the fluffy side but with some serious challenges facing each of the family members. They're all flawed and believable, if a bit cliché. I liked the fact that there were people to love, times you wanted to shake a character, and at least one character you who got what he deserved. I found the book utterly compelling -- to the point that I had trouble putting it down at night and couldn't wait to pick it back up, the next day. It's nearly 400 pages, but I blew threw it quickly (in two days, which is quick for me) and really enjoyed every minute. While it's set during the Christmas holiday and gives you a nice feel for Christmas in a small family that's forced to be locked away, it's less a Christmas novel than a family drama. I was totally swept away by Seven Days of Us and will be looking for more by Francesca Hornak.