Sons and Soldiers by Bruce Henderson 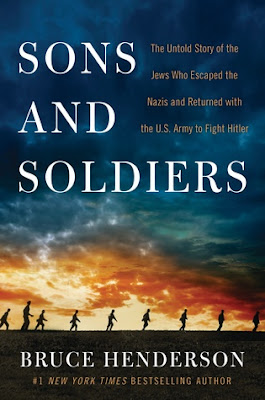 The subtitle of Sons and Soldiers by Bruce Henderson is: The Untold Story of the Jews Who Escaped the Nazis and Returned with the U.S. Army to Fight Hitler. The book begins by telling the stories of a handful of those escaped Jews, all of whom were boys and all of whom left their entire families behind (although one father and his second wife were later able to escape).

Sons and Soldiers is thorough and well researched and therefore a slow read, but for good reason. Each of the stories of the boys who escaped is told beginning around the time Hitler came into power. You really get to know the boys, their families, and the atmosphere in which they grew up -- how they were a part of their villages or cities but slowly, as the Nazi fervor grew and the laws restricted their schooling, their jobs, their finances, their freedom of movement, and everything else about their lives, things became more and more dangerous. One of the boys was imprisoned in a concentration camp, early on, and then escaped to England, only to end up being declared an enemy when Britain entered the war and put into another camp. Another ended up in an orphanage after his father lost his wife and his livelihood.

Gradually, each of these boys were sent to the United States -- some saved by organizations, all with some form of help by way of sponsorship in the U.S., often after reaching another European nation, first.

Finally, they all ended up in the service, eventually trained in the same program, in which their skill in German and sometimes other languages singled them out for training in interrogation. They were known as "Ritchie Boys" and Sons and Soldiers tells about their training, how each of them entered the country, and how they contributed crucial intel during the Invasion of Normandy, the Battle of the Bulge, and other battles.

Highly Recommended - Sons and Soldiers is an exceptionally in-depth but immensely readable book. I loved the way the subject was handled, introducing the reader to each of the boys before following their lives in the United States and then their training, return to Europe, and the work they performed interrogating captured Germans. Because they needed to get information out of the captured Germans as quickly as possible, they were stationed near the front lines, where they were subject to tremendous danger. At least one of the young men parachuted into enemy territory after only a single lesson. All were determined to do their part to free Europe from Hitler and many hoped to find family.

Sons and Soldiers is told factually, and yet it's a tremendously moving, emotional read because you get to know the soldiers so well, first as boys and then as young men. You know who they left behind and, often, when they last heard from family members. You're there with them when they're captured by the Germans or hit by shrapnel, when their friends are blown up or executed, and when they walk into the concentration camps at the end of the war and discover the horror their relatives likely suffered. Stephan, Gunther, Martin, Manfred . . . each of them will take a place in your heart. I really appreciated the fact that the author wrapped up their stories with a final section on the remainder of their lives (some still living) to the time of publication.

Note: Even the endpapers of this book have meaning. Inside the front cover of the hardback are photos of each of the boys with their families. Inside the back cover: photos of them as young men, after the war (their are additional photographs scattered throughout the book). Those who were able to find family members are shown with them.


©2018 Nancy Horner. All rights reserved. If you are reading this post at a site other than Bookfoolery or its RSS feed, you are reading a stolen feed. Email bookfoolery@gmail.com for written permission to reproduce text or photos.
Posted by Bookfool at 11:11 AM