The Kennedy Debutante by Kerri Maher 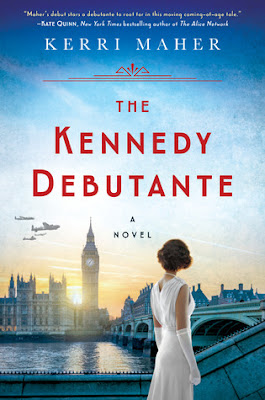 The Kennedy Debutante by Kerri Maher begins in 1938 as Kathleen "Kick" Kennedy is on the verge of her debut in London, where her father is ambassador. The Kennedys have already made a splash and are well-known, but Kick's debut goes swimmingly. Kick loves London and is quickly embraced by a wide circle of upper-class friends, both American and British. But, there's one particular Marquess who has caught her eye.

Billy Hartington, the future Duke of Devonshire, is tall, handsome, and reserved. But, he's also a Protestant and the Kennedy family is Irish Catholic. Both her mother, Rose, and his father are against the pairing. Kick and Billy are aware of everyone's reservations, but Kick is determined to create her own path. And, she is drawn to Billy from their first meeting.

Against a backdrop of impending war, Billy and Kick attend parties and Kick does charitable work, enjoying the company of their mutual friends and each other while ignoring the concerns of friends and family. But, war is inevitable as Hitler's army spreads across Europe. After Germany and Russia sign a non-aggression agreement and Hitler invades Poland, Billy joins the army and Kick is forced to go home to America. Will their love survive being separated by an ocean? What will energetic Kick do to fill her time, back home? When Kick decides to return to England, will she succeed? If she and Billy marry, how will they handle the religious problem?

I read up a little on Kick Kennedy before reading The Kennedy Debutante, so I knew the general outline of her life and enjoyed having the rest filled in.

Recommended - The writing in The Kennedy Debutante leans light, as in easy reading, but it appears to be very thoroughly researched if a bit heavy-handed, on occasion (emphasis on sister Rosemary's erratic behavior, for example, was pushed a bit hard without really leaving me with a feel for what exactly her problem was, whether it was mental illness, Attention Deficit Disorder, or simply a personality the family couldn't handle). What I liked most about The Kennedy Debutante was the glimpse into life as a Kennedy and the time period in which it's set, both of which I thought were handled nicely and stuck what I know about both the war and the family. The story doesn't go all the way to the end of her life, but I also thought the author chose a good place to stop. I'd particularly recommend The Kennedy Debutante to fans of historical fiction, people who are interested in the Kennedy family, and those who enjoy a tragic romance.


©2018 Nancy Horner. All rights reserved. If you are reading this post at a site other than Bookfoolery or its RSS feed, you are reading a stolen feed. Email bookfoolery@gmail.com for written permission to reproduce text or photos.
Posted by Bookfool at 9:40 AM