I did a pretty good job of keeping up with reviews in 2018, so there are just a handful that I didn't get to. I think only 1 was received from a publisher. At any rate, sometimes I missed one so I'm going to briefly review them and move on to 2019. 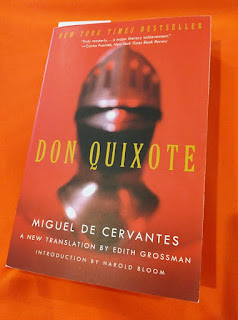 Don Quixote by Miguel de Cervantes (the Edith Grossman translation, as shown) took me months to read but it was worth every minute. The classic story of a man who goes crazy and believes himself to be a knight errant is both funny and horrifying.

This edition contains both books. In the first, Don Quixote begins his adventure with his friend Sancho Panza. He's at peak madness toward the beginning and misunderstandings often lead to terrible beatings. It's not funny when Don Quixote, Sancho, and their animals are beaten. Those scenes are often fairly cringy. But, I was determined to finish Don Quixote, this time around (I think it was my fourth attempt? Maybe my third.) so I plowed on through the beatings and the stories within a story, which I found a bit frustrating, especially at first because they were so jarring.

The second book was a bit milder and ends sadly but feels like a proper ending.

Et voila! Finally, I can say I've read Don Quixote. And, I loved it. It was definitely a 5-star read and I'm so happy I stuck it out, this time around. I highly recommend the Edith Grossman translation. I think it made a difference; it was very readable and the footnotes were informative. 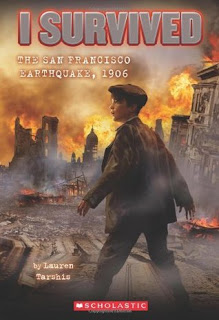 I Survived the San Francisco Earthquake, 1906 by Lauren Tarshis is the story of a young boy who is poor and bullied. When the Great Earthquake hits, he must use his wits to survive. And, when he discovers the boys who bullied him are in similar dire straits, he tries to band together with them.

I don't remember much about this story but I do recall two things:

1. I was expecting something more of a drama in real life, based on actual events -- not just a fictionalized tale that takes place during the real life event. That was disappointing to me. But . . .
2. It turned out to be such a terrific story (very plotty -- a lot happens) that I enjoyed the book immensely.

However, since I really prefer to read actual stories from history, even if they must be fictionalized to fill them out, I decided this series is not for me. That's fine. I was just curious about them. I bought two of the "I Survived" books and haven't gotten to the second. After I read it I'll donate them both to either a teacher or a school library. I gave I Survived the San Francisco Earthquake, 1906 a rating of 4/5. 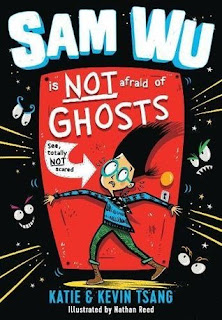 Sam Wu is Not Afraid of Ghosts by Katie and Kevin Tsang is another story about a boy who's bullied. In this case, he's an Asian American who doesn't feel like he fits in. And, he has massive angst issues. Sam Wu needs to conquer his fears and he's determined to do so.

OK, to be honest, that's all I remember. I have vague memories of scenes but the book didn't stick with me and that's why I didn't get around to reviewing it in the first place. I also didn't love the story. That doesn't mean I disliked it; I think it was more a matter of bad timing. Ever since I read it I've been thinking I need to give it a second chance. The reading came right on the heels of another book that was targeted at the same age range and which I found absolutely hilarious. You know how you can't help but compare two books that are both marketed as funny when you read them close together? That's what happened with Sam Wu is Not Afraid of Ghosts.

I may read it again, soon, just so to see if my feelings about it were colored by the proximity of the reading to that other book, although, you should see the TBR in my head (I haven't gathered my TBR stack because I still have Kiddo in the Guest Room, where I usually do my book organizing). It's huge!

I gave Sam Wu an above-average score of 3.5/5 so I enjoyed it in spite of thinking it lesser than the other humorous middle grade book I read just prior. Sam Wu was sent to me by Sterling Books for review, so again . . . if I can fit it into my massive TBR I'll give it a second go.

©2019 Nancy Horner. All rights reserved. If you are reading this post at a site other than Bookfoolery or its RSS feed, you are reading a stolen feed. Email bookfoolery@gmail.com for written permission to reproduce text or photos.