First Monday Malarkey of the new year! I know you're as thrilled as I am. ;) 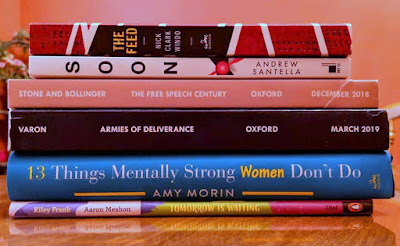 
That's everything that arrived during my time away from the blog -- which turned out to be a much longer break than I expected. Hopefully, I'll be back to normal routine within a couple of days.


So . . . not a lot of reading happened during the holidays. The Huntress was my last finished book of 2018. I started Ten Kisses to Scandal and Friday Black in 2018 but with guests in the house, we were very busy, so I didn't read anything but about 50 pages per day of The Huntress until after Christmas. I finished Ten Kisses and Friday Black after the turn of the year, and read Tomorrow is Waiting (a children's picture book) when it showed up on my doorstep. I read my only bookish Christmas gift, Vivian Maier: The Color Work, Friday. Then, we left town for the weekend and I only managed to squeeze in a tiny bit of reading time because I was flattened by the two long days.


I'm almost done with Splinterlands, a very short dystopian novel that reads like an academic paper, for a distinct reason. The story of how the world became dystopian is being told by a dying academic and analyzed, via footnotes, by some outside source. So, while the narrator is telling his personal story of visiting his three children (virtually, traveling by way of a 3-dimensional avatar who can move around and speak in the location he's visiting) he's explaining how the world came to be a place with drowning shorelines, tasteless replicated food, massive shortages, violence, and countries that have been splintered. But, he does it in rather a dry way.

I only read 50 pages of 13 Things Mentally Strong Women Don't Do, on the day it arrived, and will return to it, tonight. At least in the categories so far described, I'm apparently mentally strong. In fact, I found a lot of what women do to themselves (mental torture, really, wishing to be something they can't, like the perfect air-brushed beauties they see in magazines) surprising. But, I will definitely finish the book. It's an easy read. Occasionally, I won't understand a particular sentence -- what she's trying to say will evade me, that is -- but it's otherwise breezy.


That's it! Just one post since my last Malarkey. I'm happy with that shot, though. I had it in my head that I wanted a photo of each cat with the lighted Christmas tree in the background. I got the desired photo of Isabel but Fiona continually evaded me whenever she was in the right position. As soon as I pulled out the camera -- whoosh! -- off she went. No surprise there. I was just happy to get the one shot.

Since we had such a busy holiday, I have not found the time to sit down and analyze my 2018 reads. Last year, I never did get around to a wrap-up post, as I recall. On quick perusal, I decided my favorite of 2018 was Mad Boy by Nick Arvin. I'll save any thoughts on 2018 reading, in general, and my goals for 2019 for separate posts. I'm not worried about catching up. I've decided I'll do at least one, maybe two final reviews to make sure I've talked about every book I read in 2018, then I'll move on.

Happy 2019 to all my friends and followers! I hope the new year has gotten off to a good start for you!


©2019 Nancy Horner. All rights reserved. If you are reading this post at a site other than Bookfoolery or its RSS feed, you are reading a stolen feed. Email bookfoolery@gmail.com for written permission to reproduce text or photos.
Posted by Bookfool at 12:33 PM