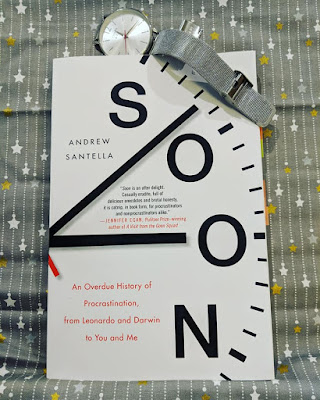 The drive to eliminate such distractions has produced a small industry of software, surveillance technologies, and apps with names like Concentrate! and Think. There is money to be made in protecting ourselves from our impulses. Among the acknowledgments for her novel NW, Zadie Smith thanked the Internet-blocking apps Freedom and SelfControl for helping free her from distraction.

Soon: An Overdue History of Procrastination, from Leonardo and Darwin to You and Me by Andrew Santella is just what it sounds like from its lengthy subtitle. It's a history and an entertainment, but also a look at the positive side of procrastination. Santella describes at length, for example, the many years that Charles Darwin spent studying barnacles after his voyage on the Beagle led to the theory of evolution that would later be written about in On the Origin of Species. In fact, there's a full twenty-year span between the publication of The Voyage of the Beagle (which, incidentally, I read about twenty years ago, maybe longer) and On the Origin of Species (which I have not -- although I'm not equating my procrastination with that of Darwin). Could that delay have allowed Darwin time to refine his theory while he took long walks around the private path he built in his yard and examined barnacles? This is the kind of avenue Andrew Santella leads you down.

The one thing Soon is not: a book on how to avoid procrastination and become more productive. In fact, the author goes into the history of productivity and how a single man with a timer ended up being the founder of all that misery-inducing emphasis on doing things faster to increase the bottom line. The author also mentions cases (besides Darwin and his barnacles) in which procrastination may have led to better results in the long run. If anything, it's a paean to the joys of procrastination.

Recommended for those interested in a light read on the history of procrastination - If you're looking for a book on how not to procrastinate, I recommend The Procrastination Equation by Piers Steel, PhD, an author and researcher who is casually mentioned in Soon. I reviewed The Procrastination Equation in 2011 and have meant to reread it but I've put it off. Haha. The link through the first mention of the title will take you to my review and it's worth adding that the author took my advice in my review of The Procrastination Equation, so there's now some form of summary card in the book. Soon is written with a lighthearted touch and I enjoyed it mostly for the change of pace. I found myself reading passages aloud to my husband, so that gives you an inkling of how much it interested me. I seldom read aloud from non-fiction books unless I find something either fascinating or entertaining enough to consider it worth sharing (partly because Huzzybuns won't listen if I read passages too often).

There is, in fact, a passage that I think is worth mentioning because I disagree with it so strongly:

For me, and I bet for most procrastinators, the whole point of the to-do list is that it enhances the satisfaction in blowing something off. If you didn't first list the thing you are now putting off, you might not ever realize that you weren't doing that thing. And where is the fun in that?

Au, contraire, Mr. Santella. I'm an inveterate list writer and I write lists for the purpose of reminding myself what needs doing (because, frankly, I'm an airhead) and for the satisfaction of placing a little checkmark beside each item completed. I cannot even begin to imagine taking joy in writing a list and then blowing off everything on it.

©2019 Nancy Horner. All rights reserved. If you are reading this post at a site other than Bookfoolery or its RSS feed, you are reading a stolen feed. Email bookfoolery@gmail.com for written permission to reproduce text or photos.
Posted by Bookfool at 3:40 PM

Email ThisBlogThis!Share to TwitterShare to FacebookShare to Pinterest
Labels: Andrew Santella, Dey Street (an imprint of HarperCollins), History, nonfiction, procrastination, recommended but not a favorite