This is the second installment, which gets me to all but the final book of the year. There's only one book, of these three, that I didn't read in December, and one book that I'm leaving out for separate review. 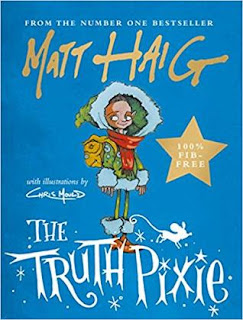 The Truth Pixie by Matt Haig is just what it sounds like: the story of a pixie who is unable to tell a lie. Unfortunately, this gets the pixie into all sorts of trouble, as you might imagine. Eventually, she's kicked out of her home. There are all sorts of fantastical creatures that she encounters and some bits of wisdom about when it's good to be truthful and when it's not.

I am a big fan of Matt Haig's writing. It's so unencumbered by expectation. You just never know what you're going to find in a Matt Haig book and I adore that. However, the two Christmas titles I've read by him have left me flat. As I was reading The Truth Pixie, I would find myself thinking of ways the pixie could have rephrased her words to make them less hurtful. It was maybe a failure of imagination on my part that I couldn't just allow myself to be swept up in the story.

I don't recall the ending but I do remember I liked how the book ended. Unfortunately, I read The Truth Pixie in November and it just didn't stick with me. It's gotten sparkling reviews so it's a book that I plan to give a second chance, probably during the next Christmas season. If it still doesn't enchant me the second time, I'll pass it on. 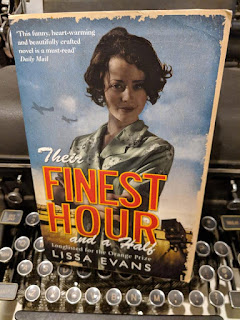 Their Finest Hour and a Half by Lissa Evans is the story of a Welsh woman, Catrin Cole, who is hired to write the women's dialogue in a WWII propaganda film designed to keep hopes high during the war by focusing on the story of twins who joined in the Dunkirk rescue operation after borrowing their drunken father's boat.

The true story, which Catrin finds out when she interviews the Starling sisters, is rather disappointing. But, when she pitches the idea to her fellow writers, they immediately take up the story, romantically fictionalize it, and turn it into something inspiring.

As they're writing the script, improving it, and finally putting it on film, you also get to know the actor who plays the twins' drunken uncle, a washed-up older actor who has difficulty tolerating small roles. The majority of the story is set during the London Blitz and I confess that much as I loved the unfolding story of how a film went from idea to theater, I most loved the visceral sensation of the bombings. But, honestly, I love everything about Lissa Evans' writing. She has become a new favorite author in recent years and I've yet to read anything less than stellar by Evans. Wonderful characterization, obviously well-researched settings, smart writing, and plenty of humor make her writing a stand-out.

I've mentioned Their Finest Hour and a Half, already, because we watched the movie before I read the book. The movie is also excellent, with wonderful actors, lots of funny moments, and that sense that you were there that you get from the book. 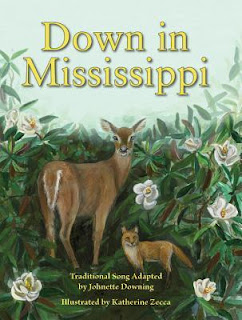 Down in Mississippi by Johnette Downing and Katherine Zecca is a children's book that Kiddo bought for our eldest grandchild for Christmas. Naturally, I can't pack up a children's book to mail away without reading it first, so I read it -- and it hasn't made it out the door, yet (but it will, I promise).

Down in Mississippi is apparently based on a song and also is a counting book. The first page confused me because I didn't realize that.

I don't know how long I looked at "dolphin one" thinking, "What? What does that mean?" before I decided to move on and realized it was a counting rhyme. Duh. At any rate, I liked the book after that. After the counting rhyme, there is a section on various flora and fauna that are officially designated (state bird, state flower, etc.) in the state of Mississippi. I loved that part. And, then the book ends with the music to "Down in Mississippi" (treble part), the song.

While the illustrations are understated (or, maybe you could go so far as to call them "dull" of color), I liked the rhyme, the information about state flora and fauna, and the fact that in the end you can learn the tune if you're able to read music, so I gave the book four stars. I really do dislike the subtlety of the illustrations, though. In a children's book, I'm a fan of bold color.

Next up will be a review of The Huntress by Kate Quinn (probably tomorrow) and then I'll be able to post my full list of 2018 reads with links to every review.

©2019 Nancy Horner. All rights reserved. If you are reading this post at a site other than Bookfoolery or its RSS feed, you are reading a stolen feed. Email bookfoolery@gmail.com for written permission to reproduce text or photos.
Posted by Bookfool at 1:14 PM