As Summers Die by Winston Groom 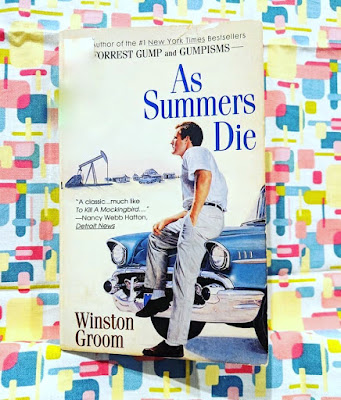 "Sometimes I don't know why I do anything I do," he said soberly. He looked out of the window and into the fog. Damn, he thought. It was only a week or so till Christmas. A lonely time of the year. He really wanted to fall in love.

Set in 1960s Louisiana, As Summers Die tells the story of a small-time lawyer named Willie Croft. Willie spends most of his time dealing with minor cases until something big happens near Bienville, Louisiana. Oil has been discovered close to Creoletown, where the black people live. An older woman who owns land that used to belong to a prominent family, the Holts, hires Willie when the Holt family tries to buy her off and then force her out of her property. She holds the deed to the land she lives on, which was given to her by the head of the Holt family. Her children are his progeny, unbeknownst to the family. When they find out, they're incensed.

The rest of the lower-income blacks will probably be bought out or forced off their property if a solution isn't found. Willie calls in an expert in dealing with oil discoveries to help him come up with a plan. But, the Holts will do anything to make sure that at least one deed disappears and the oil profits will be theirs alone.

Recommended - A very good story of racism and greed with some clever legal and business maneuvering. I enjoyed rooting for the underdogs and liked the tension caused by the danger to those who dared to try to outsmart the wealthy Holts. I was a little ground down by the racism and the fact that poor Willie was dangled by the woman he was attracted to but I liked the sense of time and place. That surprised me because I'm not a big fan of Southern fiction, in general.

I would never have thought to read another book by Winston Groom, in spite of the fact that I enjoyed Forrest Gump, so I'm glad As Summers Die was an F2F group selection. I checked out a copy from my local library (yay, libraries!). Originally published in 1980, the book is now only available new in Print on Demand, which is pricey. Much as I enjoyed it, As Summers Die is not a book I'll reread so I'm really happy the library had a copy.

©2019 Nancy Horner. All rights reserved. If you are reading this post at a site other than Bookfoolery or its RSS feed, you are reading a stolen feed. Email bookfoolery@gmail.com for written permission to reproduce text or photos.
Posted by Bookfool at 12:07 PM