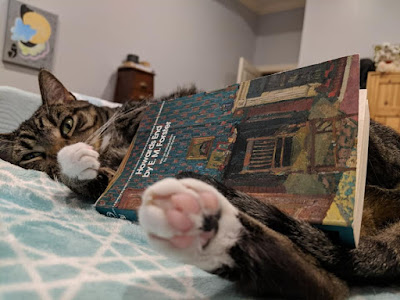 That evening Margaret took decisive action. The house was very quiet, and the fog -- we are in November now -- pressed against the windows like an excluded ghost. Frieda and Helen and all their luggages had gone. Tibby, who was not feeling well, lay stretched on a sofa by the fire. Margaret sat by him, thinking. Her mind darted from impulse to impulse, and finally marshalled them all in review.

Howard's End by E. M. Forster is a book I've meant to get to for literally decades, as is the movie. So far, I haven't had any luck finding the movie on any of the streaming channels we have access to, but I'm happy to have finally read the book for my January classic selection.

Howard's End is a delightful classic about two single women who are into the arts, intellectual pursuits, and travel. When Helen visits acquaintances from their recent travels and then the two women (Helen and her sister, Margaret) cross paths with a struggling man whose umbrella Helen accidentally absconds with, a chain of events is set off and at the center of it all is a house called Howard's End.

Since I haven't seen the movie and Howard's End is not one of those classics that people bring up in conversation regularly, I had no idea quite what I was getting into. I knew I liked the only other book I've read by Forster but even the trailer to the movie (the Merchant and Ivory film starring Helena Bonham Carter as Helen and Emma Thompson as Margaret) didn't tell me much, although I thought it hinted at sinister happenings. So, I was pleasantly surprised that there was occasionally a slightly comedic touch to the dialogue.

I'm not going to get into the plot because I'm sure it's been written about all over the place, but my favorite scene is one in which Margaret (I don't recall if Helen was present) attends a gathering of women in which they do an intellectual exercise. The set-up is that a millionaire has died. Each person is assigned an identity and then has to argue what should be done with the deceased's million dollars from the perspective of the identity given to them. So, one woman might have to argue from the perspective of the millionaire's son, another from that of a neighbor, and so on. I not only loved the scene because it was entertaining and thought-provoking but also found myself wishing I happened to hang out with people who liked playing that sort of mind game. The women in the novel had a great time and laughed a lot. Doesn't it sound fun? I'm sure there are board games with similar concepts but we don't currently have any friends that enjoy game nights, as we used to.

Recommended - The only reason I'm not giving Howard's End my highest recommendation is that sometimes the language of turn-of-the-Twentieth-Century England lost me. There would be some bit of dialogue with sentences that I'd have to read and reread or just blow past because I couldn't entirely follow them, although I always at least got the gist of what they were saying. I just didn't always understand the detailed meaning because of their dialect. At any rate, I thoroughly enjoyed Howard's End and a few passages that I couldn't completely follow were not enough to ruin the story in any way. Howard's End was first published in 1910. My edition (shown on a Fiona-cat easel) was printed in 1985. Chances are good that I bought it at a library sale but it definitely has been lurking on the shelves for a very long time.