The Girls at 17 Swann Street by Yara Zgheib 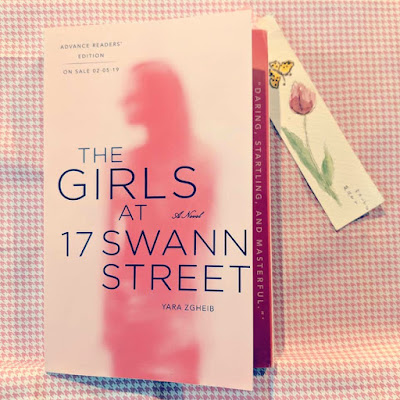 The Girls at 17 Swann Street by Yara Zgheib is the story of Anna and her time at a facility for women with severe eating disorders. Anna is dangerously anorexic and will probably die if she doesn't get urgent treatment. So, she moves into a group home for anorexics and bulimics where she must eat a carefully planned diet and work her way back to health. Through flashbacks we learn how Anna developed the mindset that made her starve herself and view her unfolding love story while in the present she develops fragile friendships and fights her inner demons.

The Girls at 17 Swann Street is harrowing but surprisingly uplifting. It's also a bit of a learning experience. I knew anorexia caused a lot of problems, like heart issues and hair loss, but I didn't realize the extent of the systemic failure it causes, the danger of "refeeding" syndrome (when the body can't adjust to taking in nutrients and a person dies -- although I have heard of this in Holocaust victims, I never thought to apply it to anorexics), or the crippling mental aspect that makes it difficult for an anorexic to force herself to eat.

Recommended but this one is rough - I would absolutely not recommend this book to anyone who has a history of eating disorders because you are in the mind of Anna, an anorexic, and her thought process could be triggering. It's a disturbing point-of-view but, as I said, in an informative way. I went through a phase in high school during which I hid some of my food and exercised vigorously because I was convinced that I was fat, but it was not at the level of Anna's dysfunction. I never had the extreme kind of thoughts that she did, nowhere near. It's really quite shocking that someone who is literally dying of starvation can still battle their fear of food in such a dramatic way. Hard as it is to read, reading The Girls at 17 Swann Street is an excellent way to really gain an understanding of the thought process of someone with an eating disorder and why it's so difficult for them to unlearn their habits.

The ending is wonderful and I adored the love story. Anna is married and her husband is completely devoted to her while some of the other girls have nobody or have been abandoned because family can't bear to watch their loved one struggle. A major theme appears to be that with a psychiatric illness, having support may literally be the difference between life and death.

I received an ARC of The Girls at 17 Swann Street from St. Martin's Press for review. Thank you!