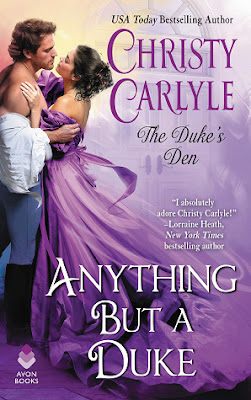 In Anything But a Duke by Christy Carlyle, Diana is an inventor who hopes to sell her (very practical) inventions to keep her family afloat. She has little interest in marriage but promises her mother that she'll look for a suitor if she fails to sell her latest invention. Her family has fallen on hard times and she's determined to help out. Aidan grew up in poverty but has become wealthy through part ownership in a gambling establishment (which was described in more detail in the first Duke's Den book, A Duke Changes Everything). However, without a title, he is forbidden entry to certain establishments and events. He needs a bride with titled connections in order to obtain access. What will he do when he falls for a stubborn inventor without the title or connections required?

Diana and Aidan meet in the opening scene when he's robbed and she happens across the robbery-in-progress while on her way to a meeting. But, then they don't see each other for over a year. When they do, Diana is searching for a patron to help her fund her latest invention, which is a primitive vacuum cleaner that uses suction created through a manual pump. The opening scene nicely establishes Diana's determination and courage.

I had a little trouble letting go of skepticism about the concept of a female inventor who created the vacuum cleaner, since that's a real invention that is credited to not one but two men on opposite sides of the Atlantic Ocean, but I liked the story, anyway. I just didn't fall massively in love with it because of that slight dissonance between fiction and reality. If I were the author, I have no idea how I'd resolve that issue -- an inventor seeking funding during a time period in a past whose inventors are known in the present? Tricky. But, I liked the characters and decided to try to shove my disbelief aside and just enjoy the story.

Recommended but not a favorite - An unremarkable story but it was the likability of the characters that made this book work for me. I cared enough to eagerly await their happy ending. Aidan's upward mobility is a little hard to buy into, and yet it makes him a sympathetic character. Diana's invention is a stretch as well, but again . . . she's an interesting character and her motivation worked for me. Yes, you have to work a little to suspend disbelief but it's worth the effort, in my humble opinion. I particularly liked the ending, which was very satisfying.

Email ThisBlogThis!Share to TwitterShare to FacebookShare to Pinterest
Labels: Avon Romance, Christy Carlyle, one in a series, recommended but not a favorite