The Girl He Used to Know by Tracey Garvis Graves 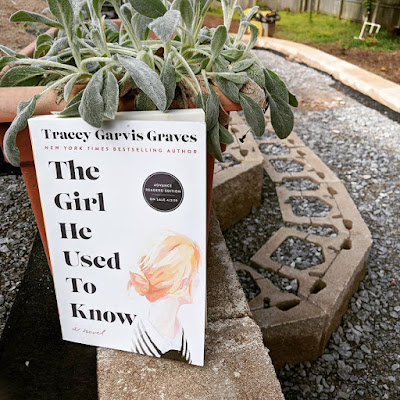 The Girl He Used to Know by Tracey Garvis Graves is about a couple who have reunited after 10 years apart. College sweethearts, Annika and Jonathan are surprised to find each other a decade after they parted. She has some unusual quirks but he's patient and kind. She loves her job as a librarian and he hates his investment banking job but is determined to succeed. Can they work through the complications that caused their breakup, along with the problems of the present and make it last, this time around?

OK, so about those quirks . . . it's pretty obvious from the beginning of the novel that Annika is on the autism spectrum, so her unique mannerisms, mode of speech, and difficulty with social interaction are not minor. In the past timeline, she and Jonathan meet at a chess club where only one person is willing to play with her. Like many high-functioning people on the spectrum, Annika is one sharp cookie. Their romance in both the present and the past unfold at around the same pace. So, while they're getting to know each other all over again and testing the waters, both a little afraid that it won't work out a second time, you're also getting to know them as a couple in college and eagerly waiting to find out how they ended up apart (because, honestly, they seem so perfect for each other).

I finished The Girl He Used to Know a couple weeks ago. I read maybe a chapter on the first night that I opened it and the next day construction on our patio was halted by rain. But, then we had a pleasant, sunny afternoon, so I dragged a towel outside and plopped it over the unfinished steps, sat in the sun, and read, hence the photo on the incomplete steps. I moved from steps to porch chair to couch to bed with that book and could. not. put. it. down. I had to warn my husband that I wasn't going to come up for air until I finished. It's very unusual for a book about a relationship to grip me so intensely but seriously . . . I adored the two main characters and was absolutely riveted. I had to know how their story would turn out.

In the last 30 pages or so, something major happens and I don't think I breathed for the entire last portion of the novel. Yes, it's true, I'm dead. And, oddly, I didn't love the ending. But, it didn't matter one bit. I enjoyed the book so much till that point that an imperfect (abrupt) ending wasn't enough to convince me to take off even half a point. I gave The Girl He Used to Know a 5-star rating at Goodreads and then couldn't stop thinking about it.

Highly recommended - The Girl He Used to Know is proof that a book with two immensely likable characters can be compelling to the point of being impossible to put down. Wonderful characters, flawed but kind, and a moving, entrancing tale of rekindled romance for an unusual couple. The last 30 or 40 pages had my heart in my throat.

I loved The Girl He Used to Know so much that I ordered another book by Tracey Garvis Graves, The Island. If I could stop everything and read it right now, I would. But, I have quite a toppling stack of ARCs to conquer in the next couple of months. We'll see what happens. I might not be able to keep my hands off of it.

I received a copy of The Girl He Used to Know from St. Martin's Press via Shelf Awareness and wow, do I feel like a lucky girl for getting to read this book. The release date was April 2.