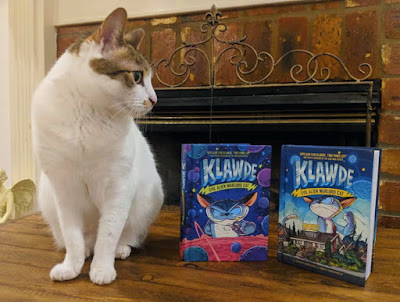 Klawde, Evil Alien Warlord Cat, Books 1 and 2 were sent to me together and they're such fun reading that I am toying with pre-ordering the third in the series (which is scheduled for release in October).

The first in the series, Klawde: Evil Alien Warlord Cat #1 tells the story of a vicious warlord cat from another planet. Former High Commander of the planet Lyttyrbox, Wyss-Kuzz is banished from his home planet and sent to a place where carnivorous ogres live: the planet Earth.

Wyss-Kuzz arrives in Oregon in the driving rain and attempts to enter Raj Banerjee's home by pressing a button, which turns out to be a doorbell rather than an electronic portal opener (disappointing -- so primitive, these humans). The brilliant warlord is stuck pretending he's an ordinary cat and is instantly adopted. He's named Klawde by the family. Klawde is not a nice cat at all, which leads to a bit of hilarity, but Raj is excited to have a kitty.

Raj has just moved from Brooklyn, New York, and the last thing he wants to deal with is nature but his mother insists that he must go to a 2-week nature day camp that culminates in Survival Night. In alternating chapters, the story of Raj's time at camp (with evenings at home) and Klawde's hours spent building a transporter to return to his home planet unfolds.

I can't remember the last time a book literally made me laugh out loud like Klawde did. It's been a while. As I was reading this delightful immensely fun outer-space-cat-meets-normal-Earthlings story, I kept thinking about my youngest son (a cat lover, like myself) and how much he would have adored this book as a youngster. Full of dark humor and ridiculous situations, it seems right up his alley. In fact, I mentioned the book to him on the phone and Kiddo admitted that even now, at 27, he would probably enjoy it. Klawde is a mean cat who scratches frequently and, let's face it, he must have been pretty evil to have been banished from his planet. But, in the end he becomes friends with Raj.

In the second book, Klawde: Evil Alien Warlord Cat #2: Enemies, both Raj and Klawde are faced with new challenges. Raj is doing fine at his new middle school since he shared the fact that his best friend from Brooklyn is the son of the artist who created the popular Americaman comic books. The only problem with this story is that Raj and Cameron are no longer friends. When Cameron shows up in the same small town in Oregon where Raj has moved, his status as a newly popular kid is in jeopardy. And, when Cameron helps his team perfect their project in robotics class and it appears that he may have sabotaged Raj's team's robot, Raj falls sway to Klawde's advice to take revenge.

Meanwhile, Klawde has returned to Earth after being betrayed by his former lackey, Flooffee-Fyr, who closed the wormholes to his home planet. Klawde has trained his humans and one could say he is learning how to behave like a normal pussycat. He no longer scratches the way he used to. But, he's bored waiting for Flooffee-Fyr to fail as the new emperor. Then, he gets a brilliant idea. He'll set up a new school for warriors. After his first attempt (training the neighborhood cats) fails, Klawde decides he must start from the beginning and he brings home three kittens to train. It's going well but then disaster strikes. Klawde's mortal enemy Ffangg has also been banished to Earth. And, he's determined to make sure Klawde is humiliated in every way. Revenge is definitely on the menu for Klawde, as well as Raj.

Oh, my gosh, I love these books. Enemies is every bit as good as the first in the series, clever and funny with such distinctive voices. The contrast between Klawde, an uppity former high emperor cat, and Raj, who is really just a nerdy but nice kid, gives the book a raucous spice:

All day, I stewed in the bilious juices of my fury. I must have my revenge! But how? By what means?

As my massive feline brain analyzed all the possible stratagems, the boy-Human arrived home. I hissed at him to leave me alone, as I needed privacy for my scheming. His pestering, however, was relentless.

"But Klawde, don't you understand? Our robot won! On Monday I get to show it off to the whole school!" He was practically jumping up and down with excitement. It was most unseemly.

Both highly recommended - A little sci-fi, some clever plotting, distinctive voices, and loads of humor make this a winning series. And, Raj learns his lesson about revenge being a bad thing (after that last post, you know how important that is to me in a children's book). Really, the only question is whether or not my youngest son will be able to pry these books away from me because I know he'll want to keep them, once he's read the two books.

This is the final post for National Pet Day. My thanks to Penguin Random House for the Klawde books and the other books I had the privilege of reviewing, today.

©2019 Nancy Horner. All rights reserved. If you are reading this post at a site other than Bookfoolery or its RSS feed, you are reading a stolen feed. Email bookfoolery@gmail.com for written permission to reproduce text or photos.
Posted by Bookfool at 5:26 PM