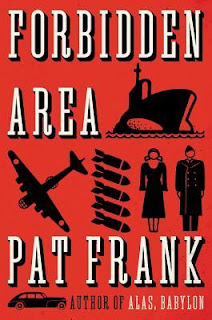 Forbidden Area by Pat Frank is the only book I managed to finish during last week's mini-slump and it's a good one but it took me the entire week to get through it because I was struggling to even talk myself into reading. The story eventually became exciting enough that I had trouble putting it down, thank goodness, thus ending the slump (for good, I hope).

Published in 1956, this Cold War era novel by the author of Alas, Babylon is about the run-up to a nuclear attack and the effort by a team of brainy people to prevent the destruction of the U.S.

The first chapter is dramatic, tense, and nerve-wracking, so I was disappointed when the story shifted from the edge-of-your-seat landing of Russian spies witnessed by two teenagers who were not where they were supposed to be to the perspective of Katy Hume, an extremely smart woman who serves in the Intentions of the Enemy Group within the Atomic Energy Commission. Katy and a handful of men are tasked with determining what the Russians are up to, their objective being to avert potential nuclear war. As the only woman in the group, she has to deal with sexism and the attention of two men who are both in love with her. Yawn. While they eventually figure out the Russian plan of attack, there's a lot of fairly dry description of their discussions and Katy dealing with men, both those in love with her and those who talk down to her.

While the people in the Intentions of the Enemy Group are dickering about what's of concern and what's not, planes are disappearing. Are they suffering from metal fatigue or has something else gone wrong that's causing them to crash? Could it be sabotage?

The knowledge of the teenagers on the beach, the investigation of the blown-up planes, the predictions of the Intentions Group, and the actions of a traitor who runs a bank all eventually intersect and once that happens and you realize that the clock is ticking, the book becomes pretty suspenseful, again. But, parts of Forbidden Area are a bit of a slog. Still, I enjoyed it immensely, once I got over my slump and when I closed the book I was so satisfied that I looked to see what else Pat Frank wrote that's still available.

Highly recommended - Although it could be slow and at least one of the storylines was protracted, Forbidden Area is also occasionally heart-pounding and it has that, "You know enough to want to holler at the characters to just freaking look over there" attribute (fun, but nerve-wracking). So, it's really satisfying when the threads eventually are tied together.

After reading my review of Alas, Babylon, I'm pretty sure Forbidden Area is almost on par with the classic post-apocalyptic novel that is so much better known. You do have to be patient with the slower sections, but it's worth sticking out.

©2019 Nancy Horner. All rights reserved. If you are reading this post at a site other than Bookfoolery or its RSS feed, you are reading a stolen feed. Email bookfoolery@gmail.com for written permission to reproduce text or photos.
Posted by Bookfool at 7:04 AM