Meet Me in Monaco by Hazel Gaynor and Heather Webb 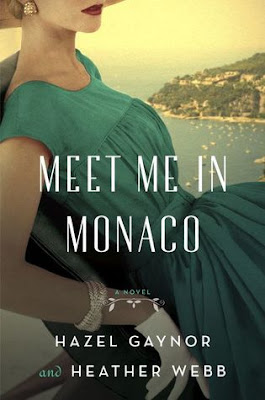 I just wrote four full paragraphs about Meet Me in Monaco by Hazel Gaynor and Heather Webb and decided it's far too plotty to summarize easily. I don't want to give anything away. So, I'll just refer you to Goodreads for the book summary (Meet Me in Monaco link) and tell you that it's about a perfumer named Sophie and a photographer named James who meet and fall in love against the backdrop of Grace Kelly's romance and marriage in France.

I primarily chose to read Meet Me in Monaco because of the backdrop. I've always found it fascinating that an American actress became a princess in a French principality but I've only read bits and pieces about Princess Grace, her rise to fame, and her marriage. So, it was Grace's story in the background that appealed to me, initially.

As it turned out, I loved both stories. There's enough about Grace Kelly becoming a princess to fill in some of the gaps in my understanding of her romance. But, the romance between Sophie and James is equally appealing, if a bit of a rollercoaster ride. James is divorced with a daughter in London and his job is based there. Sophie's true home is in a small village in France where her herbs and flowers are grown for use in the perfumes she creates. Her father started the business, kept a notebook of his formulas, and taught her about making perfume. It's the connection to her father and her profession that's most important to Sophie. And, therein the dilemma lies. Can either James or Sophie sacrifice what's most important to be together?

Recommended - Captivating, romantic, tragic, beautiful. Read Meet Me in Monaco when you're in the mood for romantic historical fiction or if you're dying to learn a bit more about Grace Kelly but don't mind if she's not the main character. She's there, dropping into scenes as she develops a distant but charming friendship with Sophie and there's enough about Grace to fill in the gaps if you only know about her remotely, as I did. Some of the descriptions of places she went and things she did sent me scrambling to find out more or look up images online. There is a video of her arrival in Monaco by ship (for her wedding) on YouTube! Cool.

Meanwhile, both of the main characters, Sophie and James, have a lot going on and the book is surprisingly more driven by plot than characterization. Still, there's always the "Will they or won't they end up together?" question about James and Sophie lingering. Will James find a way to connect with Sophie without losing his daughter? Will Sophie be able to escape the destructive relationship she's kept secret from James? Will Sophie's business survive or will she have to sell to the real estate agent who won't leave her in peace? What will happen when tragedy strikes? I had trouble putting the book down. It's surprising, sometimes heartbreaking and ultimately satisfying. I loved all the unexpected turns the story took.

I received an Advance Reader Copy of Meet Me in Monaco from HarperCollins in exchange for my unbiased review. Many thanks!