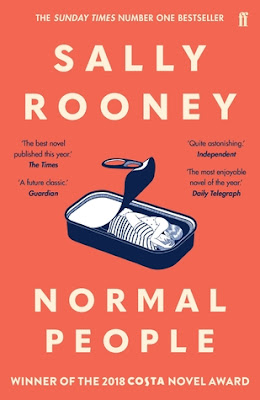 In Normal People by Sally Rooney, Marianne is a wealthy outcast who is crackling with intelligence but hasn't got a single friend in school (the equivalent of American high school, I think, but the book takes place in Ireland). Connell is equally sharp and has a wide circle of friends. His mother cleans Marianne's house and he'll occasionally stop to talk to Marianne while he waits to pick up his mother from work. In her home, Marianne speaks freely in a way she doesn't at school, and her conversation with Connell is natural and relaxed. When they begin sleeping with each other, though, it's with the knowledge that neither can acknowledge the other in school.

Both are accepted into Trinity College in Dublin, where their circumstances are flipped. Popularity and friendship are based more on income than personality at Trinity. Connell is admired for his looks but he feels adrift and friendless while Marianne now has plenty of friends. Their unique friendship continues even though they occasionally drift away, through difficult relationships and good ones, depression and abuse, ups and downs. Slowly, Connell becomes aware of Marianne's dark secrets and Marianne helps him deal with his own challenges. When push comes to shove, they may hurt each other at times, but they're always there for each other, as well.

Highly recommended - The depth of characterization in Normal People and the simple but powerful writing style made it nearly impossible to put Normal People down. I was utterly fascinated with the characters, the writing, the depth of emotion, and the way Marianne and Connell seemed to circle each other magnetically and simultaneously fiercely resist the pull. Would they end up together or would one of them eventually drift out of orbit, maybe marry another?

I'm not going to ruin the ending. I'll just say that while it wasn't the kind of ending I prefer and I had to sit with it over a bowl of spaghetti (which was really terrific), I realized after letting it settle that it was, in fact, the perfect ending for this particular story. Most crucially, I am in awe of the writer's keen observation and mastery of language. I definitely plan to read her other book, Conversations with Friends.

The cover of Normal People shown above is the cover of my personal copy, which I ordered from Book Depository, so it might not be what you can find in the US. I just finished it and immediately sat down to write my Goodreads review, then realized there wasn't much I'd change about that review (my reviews at GR and the blog are often quite different in size and style) so most of this is copied directly from that review. I had planned on working on my review of The Mueller Report, today, but it's going to require some thought and care and may take a little longer than I'd hoped. I wrote some preliminary thoughts, last night, and totally went off the rails — too much, too much. I'll try to whittle it down but still hit all the most important points. If you're waiting on that review, please be patient with me. It's such an important book that I want to get it right.

©2019 Nancy Horner  All rights reserved. If you are reading this post at a site other than Bookfoolery or its RSS feed, you are reading a stolen feed. Email bookfoolery@gmail.com for written permission to reproduce text or photos.
Posted by Bookfool at 3:17 PM