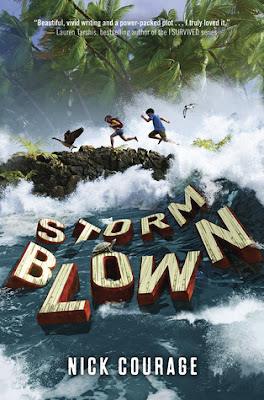 In New Orleans, Emily's brother is recovering from surgery after a major illness and his immunity is still compromised. Her father works on an oil drilling platform in the Gulf of Mexico and her mother spends most of her time fussing over Emily's brother. Because of his lowered immunity, Emily isn't even supposed to walk into Elliot's room and her mother hardly even looks at her, anymore. When Emily spends the night in Audubon Park and develops the sniffles, her mother shoos her to a friend's house, not realizing that Emily's friend isn't even in town, a hurricane is on the way, and Emily is feeling rejected. Emily leaves without telling her mother where she's going and shortly after, her phone battery dies.

Alejo lives in Puerto Rico and helps his padrino (the online dictionary and a translator both say padrino means godfather) with his work at a resort hotel. His mother has moved to the American continent and someday Alejo hopes to join her. But, for now, he lives in an impoverished area outside San Juan and he's happy. When news that a deadly hurricane is coming reaches the resort, Padrino Nando decides he must go home briefly. But, when Nando doesn't return, Alejo becomes concerned and decides he must go find his padrino.

While Hurricane Valerie is growing, the people the National Climatic Research Center are almost all home with the flu so one employee who isn't an expert in weather patterns, Joy, is charged with watching the crucial numbers that indicate the strength of the storm. Suddenly, after merging with two other weather systems, Hurricane Valerie becomes a "megastorm" and Joy has to gather the team together to head down to New Orleans.

In a heart-pounding second half of the book, Megastorm Valerie moves into Puerto Rico and then New Orleans as two children face their fears alone outdoors with the dangerous storm moving in quickly.

Storm Blown by Nick Courage is a middle grade book told from 5 separate viewpoints: Emily's, Alejo's, a petrel flying over the Atlantic, Emily's father on an oil platform, and Joy's.

Recommended but I had some minor issues with this book - First, what I loved. Storm Blown is edge-of-your-seat as the storm moves closer and then arrives. It's dramatic, exciting, adventurous, and the author treats the emotions of the two youngsters with respect. I could easily imagine myself in the shoes of those children, drenched and wind-blown but determined to find a loved one (Alejo) or hide from them in a favorite place to seek comfort (Emily). In spite of what I considered its flaws, I really enjoyed Storm Blown and I'm glad I read it. I think I would have enjoyed it if it had been around when I was in elementary school.

The minor issues I had were the fact that the author chose to create a fictional research center rather than using the National Hurricane Center (I'm sure he had his reasons but I would have much preferred a glimpse inside the NHC and a bit of accuracy) and a couple statements I considered inaccurate about hurricanes. But, it's a children's book and it was more about the courage those children had to summon, the emotions they were going through, and the danger they were encountering than what a government agency does. So, while I would have preferred accuracy, I enjoyed the story and definitely recommend it for the child who loves an exciting read.