The Rogue to Ruin by Vivienne Lorret (Misadventures in Matchmaking #3) 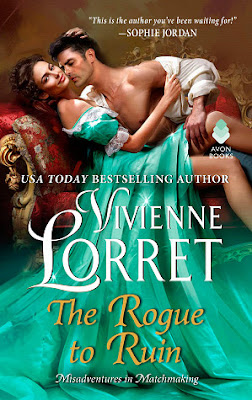 Ainsley is the eldest of the Bourne sisters and, at 27 years of age, she presumes she will never marry. In the past, she was once betrothed to a horrible man who was emotionally and physically abusive. She managed to escape. The Rogue to Ruin is her story of love and marriage, the third and final book in the Misadventures in Matchmaking series.

Now, Ainsley has decided that The Bourne Matrimonial Agency is not doing well because of the gaming hell across the street. Reed Sterling is the proprietor, a former boxer who retired and made his fortune running the business. Ainsley is certain that his business is keeping potential clients away — not the fact that her two sisters have married two of the wealthier clients, as many suspect. And, she's decided to declare war on Sterling's to drive it out of business.

Reed Sterling's early life was hard. First, his father was killed in a duel and then his mother married a series of awful men. Boxing and then his business were his escape from hardship. But he's developed a strange attraction, in recent years. The eldest of the Bourne daughters is the most buttoned-up and stiff of the lot. So, why does he find her so appealing? When Ainsley declares war on his business he's slightly amused. But, when he walks in to find a man she was formerly betrothed to threatening Ainsley, he is determined to keep her safe. How will he square his newfound affection with the damage she's doing to his business? Will the dangerous man to whom she was formerly betrothed become violent, again, or can Reed protect her?

Highly recommended - It took me a while to warm up to Ainsley. Unlike her lighthearted and slightly silly sister, Briar, you're not as quickly grabbed by the personality of the character. But, it doesn't take long to realize the couple is perfect for each other and to begin to root for them. And, I absolutely adored the ending.

This is the last book in the Misadventures in Matchmaking series and I recommend reading them in order because the other two sisters occasionally flit in and out with their spouses. Plus, there's a delicious surprise at the end regarding a regular character who is not a part of the family. I loved this series. Usually, I don't keep romance books for a reread but I've held onto all three of the books from the Misadventures in Matchmaking series, I enjoyed them so much.

I received a copy of The Rogue to Ruin from Avon Books in exchange for an unbiased review. Many thanks!

©2019 Nancy Horner. All rights reserved. If you are reading this post at a site other than Bookfoolery or its RSS feed, you are reading a stolen feed. Email bookfoolery@gmail.com for written permission to reproduce text or photos.
Posted by Bookfool at 10:20 AM