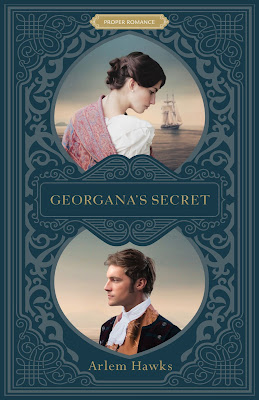 In Georgana's Secret by Arlem Hawks, Georgana Woodall's father had no choice but to protect her from the grandmother who beat her and told her she was worthless. But, as a sea captain, the only solution he was able to come up with was to take her to sea disguised as a boy. Three years later, Georgana is safe from her grandmother but growing weary of life on the sea and the other boys on the Deborah, a British Naval frigate on its way to Antigua sailing as protection for a group of merchant vessels.

Dominic Peyton's calling is the sea and he very well could be a captain, by now. But, he hasn't the money to care for his mother while awaiting a position on a vessel. So, he's turned down the promotion and joined the crew of the Deborah as First Lieutenant. On board, he finds a disgruntled second lieutenant, a captain who seems disinterested in his crew or in fighting except when absolutely necessary, and a strange, skittish, viciously bullied young boy without friends who stays in the captain's quarters.

Young George doesn't know how to defend himself, so Dominic takes it upon himself teach George to hold his own in a fist fight and offers his friendship. He's pleased when he can draw a rare smile from George and George (aka Georgana) finds herself falling in love with Dominic Peyton. But, she spent her childhood waiting for her father to come home from the sea. When the truth comes out about her identity, will she be willing and able to live that life, again?

Highly recommended - Swashbuckling fun with a romance that begins as an unlikely friendship. I love the way the heroine grows from a terrified and bullied girl with a secret identity to a spunky and daring person who saves the day. There are some terrific action scenes but the final challenge in which Georgana is the only person who can save the day is so exciting I barely took a breath while reading.

My thanks to Laurel Ann and Shadow Mountain for the review copy!