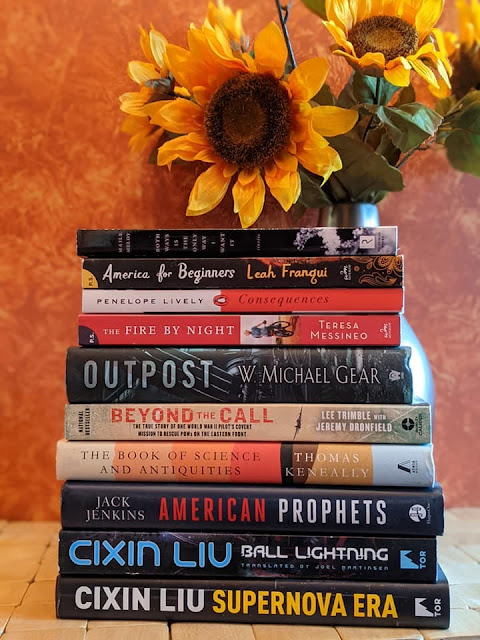 OK, so technically I'm sharing arrivals out of order because this was my final box of last-minute panic purchases and I haven't posted a photo of the first of the two boxes. But, I don't think order matters and I wanted to get these off my coffee table so photographing them seemed like a plan. There's one more that I walked away with and forgot to put in the pile to pose, so I'll save that and photograph it with the others for my next Monday Malarkey. And, after that, the "Recent arrivals" space may get a little boring. I'll have to think about how to change up the Malarkey posts to fit my lack of buying.
As I'm typing, I have made it through almost 24 days without buying a single book! I feel like I've earned a medal or something. But, actually, it hasn't been such a big deal, so far, probably because I had the two big boxes of books coming. I'm hoping that was enough to get me accustomed to not throwing books in a virtual cart on a whim. Interestingly, my lack of book buying seems to have had a knock-on effect: I don't feel like buying anything at all. In fact, I have to really force myself to get online to buy necessities (we still don't go much of anywhere but the grocery store).
In a totally unrelated side note, it feels a little weird that we now have a president who is known for using the word "malarkey", like I've lost a bit of my uniqueness, here. Ask me if I thought such a thing would ever happen!
Books finished since last Malarkey:
There was not a bad book in the lot. I will tell you, though, that the one book that I had trouble moving on from was The Evening Chorus, a story set in WWII and after, about the healing power of nature. I was so captivated by The Evening Chorus that I walked around feeling a little lost when it ended and couldn't even think about starting another book till the next evening.
Currently reading:
The Demolished Man is classic SciFi and so unusual that I thought it might help me move on from The Evening Chorus. I knew I had to find something very different or I wouldn't be able to focus on my next read. So far, it's working. The story is weird but I'm enjoying it. The other two books are both collections of short stories. I like the stories in A Good Scent, etc. but they're so heavy that I feel like I can only read one once in a while, rather than daily, so I had Bobcat and Other Stories as my secondary read and then it took over. Now, the same is happening with Both Ways. There's no hurry to finish anything, though, so I'll continue to read a story from A Good Scent whenever I feel like it.
Posts since last Malarkey:
In other news:
Well, there's not much. I'm trying to hurriedly watch all of Season 1 of Stargirl because I'm on my eldest son's subscription to HBO Max and he's decided to cancel it. I don't think I watched much else. I decided the new All Creatures Great and Small just makes me want to watch the old version, again, although I think it's nicely done. It's just not the same and the original is an all-time favorite series of ours. So, I skipped it and went to lie down, last night. Halfway through yesterday's episode, Huz showed up and said, "It's just not the same. Everyone's too young." True, especially the housekeeper. I do love the actor who plays Siegfried, though. I remember him from Hornblower. This entire paragraph has aged me.
We did watch the Inauguration of President Joe Biden. That was kind of funny, actually. I thought I'd get up, watch the inauguration, and then go on with my life. Instead, I got up and turned on the news. The TV stayed on for a good 12 hours (till the end of the fireworks), which never happens. I think I can safely say I was happy to see a new president sworn in.
I've seen a lot of posts (both blog posts and IG posts) about how much less anxiety people are having, now that we have a new president, particularly comments about being able to sleep and not having so much tension in the neck and shoulders. For my part, I realize I can now get up and not immediately feel like I have to look at the news to see what horrible thing I need to brace myself for — what new, hideous policy, what awful destruction to the environment or to ethics. It's so nice not to feel obligated to check the news. Saturday morning was normal!!! Every Friday has been a "Friday night massacre" in some form for so long. I know we still have a pandemic to deal with and horrible people who are likely going to try to let off a man who fomented literal insurrection, but for now I'm going to really enjoy relaxing for a week or two.