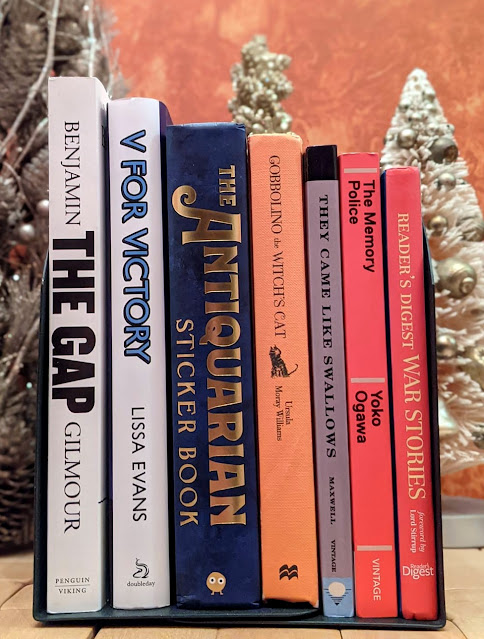 All of the above were purchases made before the end of the year. My last-minute panic buys are on their way and then a few individual titles that I pre-ordered will trickle in and . . . well, that should be it for a good 6 months, since I can't go to library sales and haven't even been able to talk myself into buying the first Native American-authored book I intended to buy for this year's challenge. I'm just too happy with the idea of reading off my shelves. It's on my wish list, though.

Not a bad start to the year, but not a great one either. I've read 4 books, so far. I dropped my annual Goodreads goal to 75. Usually, I set it at 100 knowing that's a number I can hit easily. This year, I'm hoping to throw off the yoke of obligatory reads and read from my shelves almost exclusively (again, I can't bear to say no to children's books if they're offered). Hopefully, that will mean I finally, finally will get around to reading Gone With the Wind. I'd start it today if I didn't have one last tour book to finish and two ARCs.

Georgana's Secret is the tour book I mentioned above. A Good Scent from a Strange Mountain is my second volume of short stories, the first being CivilWarLand in Bad Decline. I think I've managed to read a short story per day, although CivilWarLand was "short stories and a novella" so one of them was technically a novella but whatever. I'm just enjoying my daily reading of a shorter work, so it counts. Until I set this goal, I don't think I realized how many unread anthologies and collections of short stories I had sitting around. I will probably have no problem at all finding 365 short stories to read.

Well, this last week was something, wasn't it? I'm still distressed by the horror, perhaps even moreso than I was on the day of the American Insurrection since more violent images have been released in recent days (including a Capitol police officer being dragged down steps and beaten by Trump supporters with, among other things, a flag pole containing an American flag).

Unsurprisingly, we watched a lot of news. Husband was working from home during the Insurrection and I updated him or he'd sit for 5 minutes watching the coverage with me, between meetings and calls. We were glued to the TV on the evening of the 6th.

Otherwise, I only recall watching the premier of the new All Creatures Great and Small. I'm sure we watched a smattering of other things but I don't remember any of them. It's all been blanked out by one awful day. I don't know how you convince people who have been told for 5 years that they can't believe anything or anyone but one person that they're wrong, it was a free and fair election and nobody's out to get them. It's deeply ingrained, at this point. I have a friend from way back who has been sucked into the QAnon black hole and utterly, completely believes every one of the crazy, made-up conspiracies. I finally gave up and unfriended her after she had nothing negative to say about the attempted coup and continued spouting conspiracies. It was painful. We've been friends for a very, very long time. But, people died because of the kind of lies she's helping perpetuate and I can't be a party to that.

Can you tell I'm still riled up? It's been hard to sleep. What a rough year it's been for sleeping. I mean, the entire last year, not just 2021. I wasn't expecting 2021 to be a miraculous change from 2020, since we still have a long time till the majority are inoculated but . . . whoa. I certainly was not expecting January 6. Here's hoping for some major action to prevent similar violence in the future.

And, to end on a lighter note, here's a photo of what happened, last night. Snow!!!! 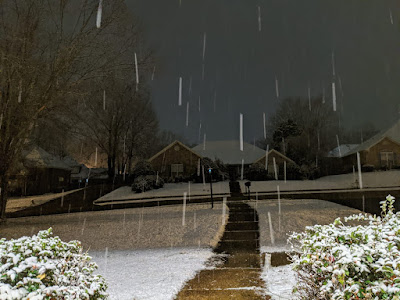