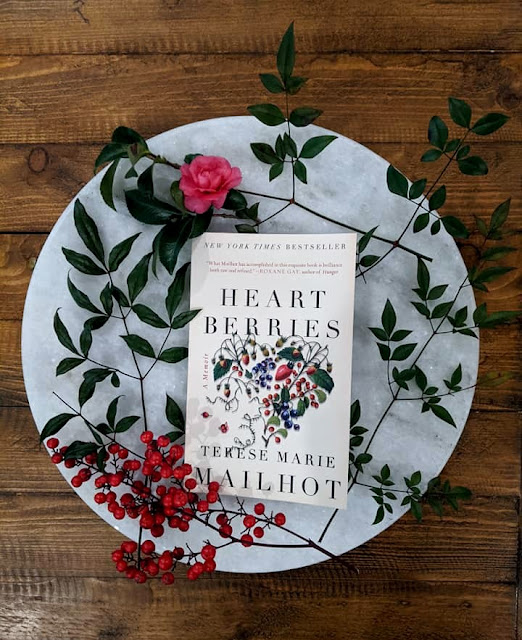 I had to give Heart Berries by Terese Marie Mailhot some thought before I even managed to rate it at Goodreads. I had (and still have) such mixed feelings. I found it poetic but strange and gut-wrenching. It's a memoir by a Native American author that's a patchwork of memories of pain, obsession, mental illness, and confusion, all written to the man she loves. She describes being institutionalized briefly after attempting suicide and her diagnoses, her early marriage and other relationships, having her son taken away by her first husband while she was pregnant with his second child, her determination to get the education she desired, her appalling childhood. But, throughout this entire narrative, there's the angst over having lost the one man she truly loves and trying to figure out if they can make it work.

You can't help but admire the author for accomplishing so much academically while fighting to keep herself alive, make sense of her place in the world within her Native American heritage and outside of it, and protect her children from the horrors she lived through. But, I'd like it if I could have comprehended more of what she was trying to say. The writing was frustrating and disjointed. Its fragmented nature can be seen as an echo of her emotions, which were all over the place, but I'm not sure if that was a deliberate stylistic choice or she simply had to write that way for the sake of her own sanity.

Iffy on recommendation - There are a lot of gushy pull quotes in the front of the book, and Roxane Gay's cover blurb is very positive. So, it's worth mentioning that a lot of people think Heart Berries is a fabulous work of art. I'm not among them. Her writing was just a little too vague for me. I felt like she was using poetic language to keep the story at arm's length because it's too painful. My preference is more straightforward writing. I couldn't tell, for example, what exactly her father did to her. There are hints, but whether he sexually assaulted her or not I couldn't tell.

What I like best about the book is that it does give you a look inside her head, even if that's a rather hallucinogenic place to be. She often repeated that Native American women's bodies are neither respected nor cared for and in this she made some references to the many Native American women who have disappeared or been murdered. This is a serious issue and one that was touched on in The Roundhouse by Louise Erdrich (link leads to my mini review, within a post of several reviews), a story that shows how difficult it is for Native Americans to get justice when harmed.

This was the January read for my personal challenge to read at least one book by a Native American or Indigenous author each month in 2021.