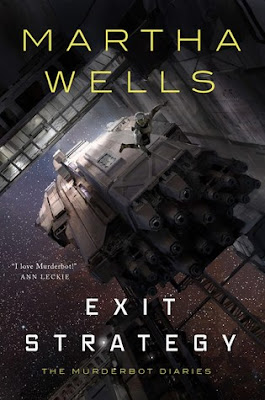 Note: For convenience, I'm going to use "he" and "him" pronouns, although Murderbot is neither male nor female as it's a part organic and part mechanical being and therefore technically an "it".

Murderbot is traveling again when he becomes aware that someone is in pursuit of him. And, whoever it is, they've got a well-armed and heavily weaponized security team. He'll have to use all his wits to get away from them. Then, a series of news items indicate that Murderbot's old friend, Dr. Mensah, is in trouble and it's likely Murderbot's fault for causing the devious GrayCris company problems, including exposing the cover-up of illegal activity he discovered in Book #3: Rogue Protocol.

Exit Strategy is the 4th novella in the Murderbot Diaries series and it brings the story full circle yet leaves an opening for the story to continue. In fact, I read a review saying the book was originally intended to be the end of the series, although there's now a novel and another book is coming out soon (a friend who has read it says the coming release is novella length). I have the novel and the new book coming out in April, Fugitive Telemetry, is one that I pre-ordered before the end of 2020. I'm so glad I did.

Highly recommended - Another edge-of-your-seat read. The Murderbot series needs to be read in order but they each stand alone. There are no cliffhanger endings.

I have absolutely no regrets about buying them all. None. They are so entertaining. As with all the other novellas, there's always some set-up in which Murderbot must figure out what's happening before a series of breathtaking action scenes. I loved the interaction between Mensah and Murderbot in the first book and it was very satisfying to read more of the same as they're reunited.

I'm saving the novel for later since Murderbot books make terrific slump breakers but I confess it's been difficult staying away from the next book, this time. I really want to read on.

Email ThisBlogThis!Share to TwitterShare to FacebookShare to Pinterest
Labels: Fantasy/SciFi, Martha Wells, Murderbot Diaries, one in a series, series needs to be read in order, Tor Books