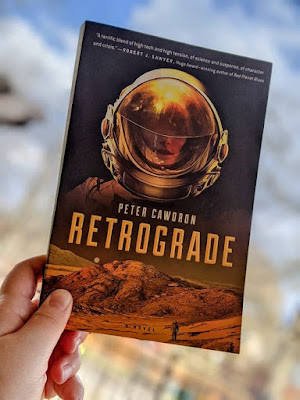 OK, first things first. After I read Retrograde, at some point I read a couple reviews and found that some readers had been under the impression that it would be like The Martian because it's also set on Mars and there's a disaster at its core. Just forget that, right now. Retrograde is an entirely different story and it deserves not to be compared to The Martian merely because of the words "Mars" and "disaster".

As the story opens, astronaut and micropaleobiologist Liz (an American) is hanging out in the Chinese living pod where the residents are having a great time playing games and drinking a little too heavily. Then, something happens and the woman in charge of the Chinese scientists in the Endeavor mission angrily sends representatives from other countries back to their own pods. There are 5 groupings of individuals from around the world on this semi-autonomous station (they grow their own food, produce their own oxygen, etc., but require occasional delivery of supplies from Earth). The narrator later explains why they're divided in the way they are but they've worked harmoniously together till now, apart from a few individual tensions.

What happened to cause the sudden animosity? Nuclear war on Earth. Communication with Earth has become difficult anyway because they're in retrograde, but what little they're able to discern is that many large cities have been obliterated. It doesn't actually seem to make any sense at all. If one country was the aggressor against another, why so many large targets in so many different countries? What happened? And, what should the astronauts on Mars do?

There's an immediate split into factions based on region but Liz thinks that regardless of what's happening on Earth, they need to stick together and figure out how to survive. It appears that their supply ship has sailed right past them, for one thing. When things start going wrong on the space station and people begin to die, they must rush to figure out what's happening and why and stop further damage.

Highly recommended for sci-fi fans who don't mind a slow start -  The first half of Retrograde is more about getting to know the people and their relationships, understanding how the station works and what it looks like, and the initial question: Should we band together to deal with this challenge or split into factions?

What happens in the latter half, when you start to understand what's happening on the station itself (not just Earth) is a plot that I found wildly implausible, although some real-life scientists are concerned about the possibility. However, I didn't care about whether or not it was implausible or felt that way (I mean . . . it takes place at a space station on Mars, which is still pretty implausible in and of itself). I was in it for this one unique story experience and in the latter half it becomes more like a thriller and a race against time to stay safe and eliminate the danger. I really loved that latter half. And, to be honest, while I had a lot of questions and kept thinking, "Are they sure there was a nuclear war or is this a test to see how they would react to such a disaster?" all my questions were eventually answered so I found the story very satisfying.

I think I got the recommendation for Retrograde from Instagram, but I'm not 100% certain. At any rate, I enjoyed it immensely and will be looking to see what else Peter Cawdron has written.