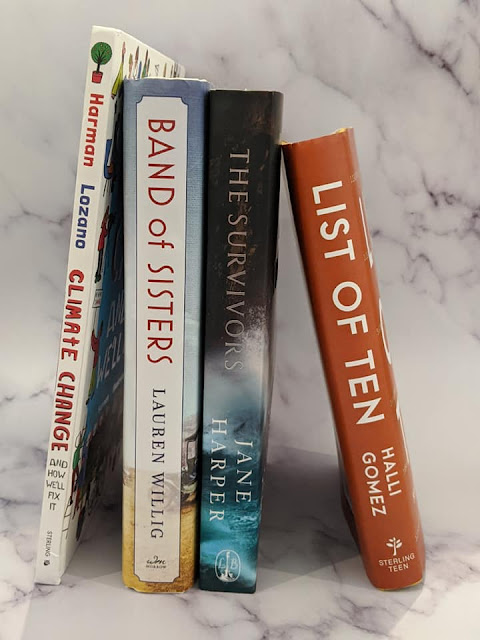 Recent arrivals (left to right):
The Survivors is the pre-order I mentioned that was on its way (ordered back in December!) I bought it from Book Depository, in case you're wondering how I got a new release in paperback.
As to the rest . . . yeah, I gave in and accepted some review books. I had such a bad month in February that I was feeling overwhelmed by the choices in my home library and decided that maybe it would be good to give myself some deadlines. Of course, I will always accept children's books so those would have been an automatic, "Yes, please," even if I didn't need to shake things up a bit.
Books finished since last Malarkey:

Finally getting back to normal! Woot! And, I liked or loved all of these, so the quality has also improved. The Remarkable Journey of Coyote Sunrise broke the bad-book spell by being fabulous and then last week I participated in the Laid-Back Readathon via Instagram and that gave me the shove I needed to get back to a normal reading pattern.

I did not manage to start another collection of short stories, this week, but it's on my Do List for today, so we'll see if that works out. I'm looking at either The Birds and Other Stories by Daphne Du Maurier or Nocturnes by Kazuo Ishiguro. I finished Exit Strategy (#4 in the Murderbot series), last night, and went straight into reading Band of Sisters. I didn't get far into it before my eyes grew heavy but I enjoyed what little I read. After Band of Sisters I'll be done with the ARCs I've received, although I have at least three more on their way (two children's; one WWII/contemporary).
Posts since last Malarkey:
I didn't post much last week because of the fact that I was doing both the readathon and the continuing 100-day art project (for which I've only missed a single day, so far). I did sit down to write reviews on Tuesday and Wednesday but ended up just staring at the screen. On Wednesday, I decided maybe writing was a bit too much to add to the other things eating my time and gave up for the week. So, hopefully, this will be a better week for writing.
In other news:

We found a series we both like! That is very unusual. When Huzzybuns says, "Let's watch an episode of . . . " and ends it with something I also like, I am happy to comply. The Mallorca Files is about a British detective who takes a prisoner to Mallorca and ends up staying to work there with a German partner. In character, it compares to Death in Paradise, which is also about a British detective working out of his country and comfort zone. It's quirky and light, classic whodunnit (who was where and when, with what possible motive) as opposed to something with bloody forensics scenes. There's no gore at all, which we both appreciate. That's on BritBox.

The only other show we're currently watching with any regularity is The Naked Chef on Pluto and the episodes are shown in no particular order. So, one day Jamie Oliver is in his shared flat, drumming with his band buddies and cooking in a tiny kitchen where he improvises when he doesn't have the proper equipment and the next day he's moving into a new flat with his wife. And, then he's single again and visiting Cornwall with his Aussie restaurant buddies, cooking in a rented beach house. His hairstyle seems to change with each episode, as well. Whatever, it's a delight. We've been fans of Jamie Oliver for a while but never had seen The Naked Chef. Huz thinks that's because it was only shown in the UK when it was new. I don't know if that's true or not but it does seem likely that he didn't make it to the US till later. He moves and speaks very frenetically in The Naked Chef and is much calmer and slower, these days.

Art-wise, I have about 6 separate projects going, which is nuts but works well for me because I often don't have the correct supplies (the tutorials always seem to require things I've never even heard of or paint colors I've never seen) and I end up waiting a week or two for them to arrive before I can move on. I tried improvising with a different color than was recommended for one layer of a tutorial I'm doing, this week, and it was . . . a mistake. Of course, the mail service is screwed up and everything takes longer to arrive, so it's good that I have several other works of art in progress while I wait for the color Parchment to get here. Seriously, I have never seen Parchment.

That's life in my world. What's up in yours?