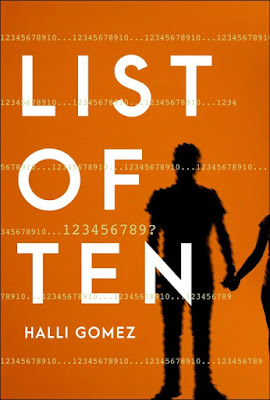 List of Ten by Halli Gomez is the story of a teenager named Troy Hayes. Troy, now 16, started showing symptoms of Tourette Syndrome (TS) as a child and a year later his mother, from whom he inherited the neurological disease, abandoned the family. He is also Obsessive Compulsive and has a fixation with the number ten. He's in constant pain from his physical tics, tries to be as invisible as possible, and doesn't go out much. He is just tired of his existence and wants to die. So, he's written a list of ten things he plans to do, a kind of bucket list with suicide at the end. But, then he is seated next to Khory.

Khory has had a traumatic experience of her own and her parents are so overprotective that she can't even go to a movie. She understands being different and has no problem looking past Troy's tics to the person inside. When he offers to tutor her in math (because "Kiss a girl" is on his list), she is eager to get the math help but also clearly attracted to him. Through Khory, Troy acquires a new circle of friends. But he's still in horrible pain and frequently humiliated. Can Troy learn to live with his rebellious body or will he go through with the suicide?

Highly recommended - List of Ten is not an easy read (emotionally speaking) because it's written in First Person and you experience Troy's anguish, but I think that's also what makes this book so powerful. Being placed squarely in the point of view of someone who has this syndrome was a great learning experience. I would never have thought about the fact that the movements would be so excruciatingly painful, for example. It makes sense; I just hadn't given it any thought.

The theme of learning to live with your challenges is always a positive one. I did find the repetition tiresome and yet when I really paid attention (repetition is necessary, since Troy is always counting to ten and making the same or similar movements), I noticed that the author did a fantastic job of not making the repetition exhausting by changing up the wording. And, reading about how painful it is to try not to make repetitive movements helps you to understand how difficult it is to live with TS.

I had one small plot issue that I've decided might be a spoiler so I'm going to leave it out of my review. While it's not crucial, that one plot point regarding one of the characters was confusing and, I think, conflicted with what was said elsewhere in the book. But, after some thought, I came to the conclusion that it was annoying but not so important and because of both that (non-importance) and the fact that the story itself seems like a powerful and important one to me because it's not a topic I've read or even seen much about, I only took off a half point and rated the book 4.5/5.

List of Ten is an eye-opening story and I think the more attention this book gets, the better, so that more people can learn about and start to understand the syndrome, hopefully making it a little easier for people with TS to deal with.

Today is release day for List of Ten! My thanks to Sterling Children's Books for the review copy!