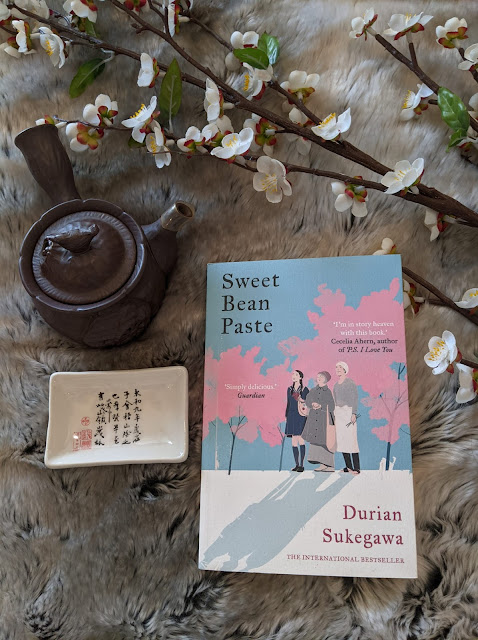 Sweet Bean Paste by Durian Sukegawa is the story of a cook named Sentaro, an older women named Tokue, and a teenage school girl named Wakana. Sentaro works in a confectionary shop selling dorayaki, a Japanese pancake filled with red bean paste. Sentaro spent a couple years in jail and was offered the job by a man who is now deceased, who paid off Sentaro's debt. Sentaro has been slowly paying him back. The new owner is the previous owner's wife.

Sentaro has been using pre-made bean paste in the dorayaki he sells when elderly Tokue comes in asking him for a job. Tokue has strangely twisted hands and he's not even sure if she could do a job if he hired her, although he could use the help. But, then she brings him some of her bean paste to taste and he's sold. If she will make the bean paste, sales will go up and he'll be able to pay off his debt to the new owner much faster.

Tokue is a hard worker and she makes friends with the young schoolgirls who come into the shop very easily. But, then something happens to cause people to stop coming to the store. If he doesn't turn things around, the owner is going to either sell the store or change it to something else entirely.

Convinced that there is something magical about Tokue's ability to make excellent bean paste, Sentaro has an idea. He will go talk to Tokue at her home. Wakana goes along and while there, they learn the sad history of the people who were forced out of their family homes, never to return to their families. Tokue was one of them. Can Tokue's wisdom help Sentaro?

Highly recommended - I've got to watch the movie, which appears to be called "Sweet Bean" without the word "paste". I just peeked online, a bit ago. Sweet Bean Paste is a sweet story with a wonderful theme: your worth is not about what you do for a living. Just being alive means you have value. So lovely.