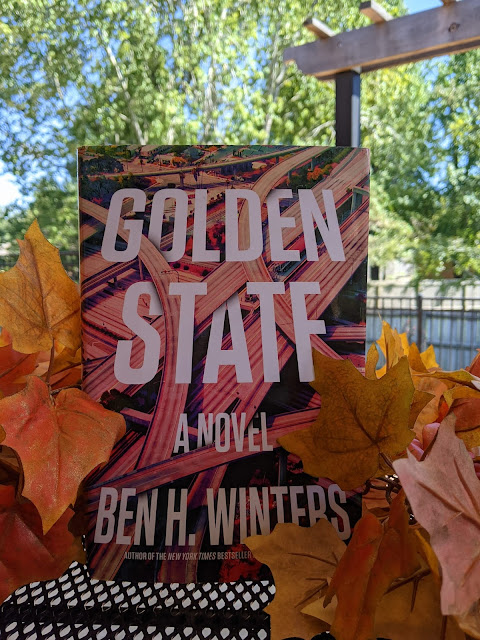 I had to blow this one up extra large so you can enjoy the fake leaves. As you can see, we're still green as Ireland, but we had the good fortune of experiencing an unseasonal cold front, yesterday (still cool, today, and maybe for another day or two, yay)! Happy Autumn!! The words feel real, for once. :)

Golden State by Ben H. Winters takes place in a near-future world in which the former California is now a country and lying is illegal. The main character, Laszlo Ratesic, works for the Speculative Service in the Golden State. Here's an excerpt from the cover flap of Golden State:

. . . the Golden State [is] a place where like-minded Americans retreated after the erosion of truth and the spread of lies made public life and governance impossible. In the Golden State, knowingly contradicting the truth — speaking a lie — is the greatest crime. Stopping those crimes is Laz's job.
Why, then, has he been ordered to the front lawn of a Los Angeles mansion, where the body of a roofer has fallen, irrefutably dead?

At the same time Laszlo is given this unexpected job that feels like it doesn't fit the normal parameters of his work, he's assigned a rookie to train. But, the rookie appears to be much more talented at sensing lies than he is. Is there something more to this accident than meets the eye?

Of course there is. But, obviously I'm not going to say any more because I don't want to ruin it for you.

Highly recommended - Wildly creative and clever writing about a society where lying is the greatest crime but the truth that is known is built upon lies. The only thing I didn't like about this book was the ending. But, then I sat with it for a while and decided it was actually perfect in that it fit the storyline and was just . . . right. It simply wasn't how I'd imagined it would end and I had to adjust my expectations to fit.

Notably: this book appears to be a response to years of an American administration in which lying became the norm and the division between the parties so deep that one had to choose to either believe the lies and continue to feed them or choose to refute them — and there was no in-between. So, I guess it's also a satire in that it pokes fun at the ridiculousness of the current political state in the US and possibly serves as a warning that lies can only last as a foundation for so long before everything comes crashing down. That's my interpretation, anyway.

I've also read the "Last Policeman" series by Ben H. Winters. Golden State made me want to read everything he's ever written and go for a reread of The Last Policeman. Here's a link to my review of the final book in the Last Policeman series which also contains links to the first two, for anyone who may be interested:

Email ThisBlogThis!Share to TwitterShare to FacebookShare to Pinterest
Labels: a touch of mystery, Ben H. Winters, highly recommended - a new favorite, Mulholland Books (an imprint of Hatchette), near future, sci-fi