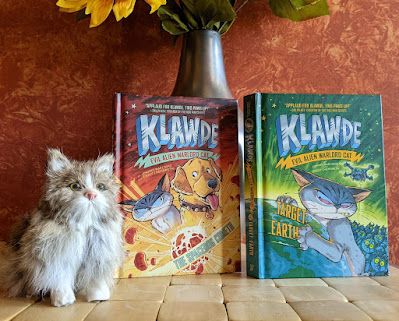 Since this is a review of two books in the middle of a series, I'm going to refer you back to my earlier review of the first two books:

But, in case you don't feel like reading that, I'll give you a quick rundown of the first two in this delightful middle grade series. The first Klawde book is about an Evil Alien Warlord Cat named Wyss-Cuzz who has been banished to the most horrible place in the universe: Earth. On Earth, Wyss-Cuzz expects things to be as advanced as they are on his home planet but unfortunately it's a primitive place inhabited by ogres who call themselves humans. Wyss-Cuzz is quickly adopted by a boy named Raj and renamed Klawde. In the first book, the evil kitty is trying to get back to his home planet by creating a transporter with the help of his devoted minion, Flooffee-Fyr.

In the second book he tries to train a crew of kittens to be warriors and things don't work out quite as Klawde anticipated. I reread the first Klawde book but couldn't locate my copy of the second, so I just skipped over it.

Note: There are some spoilers in these two mini reviews. If you're worried about that, scootch on down to the rating. 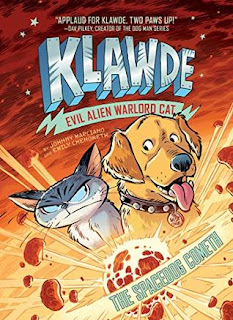 In the third book, The Spacedog Cometh, a dog is sent from one of the many dog planets in the universe (who knew there were so many?) His mission is to punish Klawde for destroying a planet.
Meanwhile, Raj's parents have gone on vacation and he's being watched by his ajji (grandmother), who has brought along a dog that she's fostering. After the spacedog arrives, she takes him in and Klawde must figure out how to deal not only with a dog that can't talk but also with this alien dog who has it in for him.
With the help of his minion, Flooffee-Fyr, Klawde uses a device like a Go-Pro to beam back films that make him look heroic. But, then he makes the mistake of leaving the camera on at exactly the wrong moment. 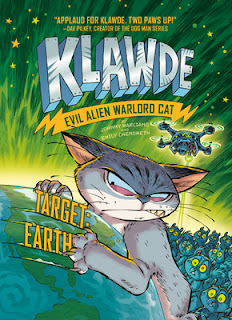 In the fourth book, Target: Earth, Klawde decides he needs to find a way to create an army, take over satellites, and defeat humankind. He starts with a few squirrels in the neighborhood, using them as zombie spies and testing his ability to get them to do his bidding.
Meanwhile, Klawde has been able to acquire some fancy technology by creating his own currency, KitKoin, and becoming filthy rich. In the process, he spoils Raj a little and Raj has to learn a lesson from that.
Why does Klawde want to kill humans after they've treated him so kindly? Because he has lost the admiration of his many subjects after having to behave submissively to a dog. Will Klawde be able to vanquish his enemy? Or will the FBI agent who lives nearby thwart his efforts?

Both highly recommended - I'm not sure reading them back-to-back would work for everyone and, in fact, even I had to occasionally take a break and read a few pages from a different book to reset. But, I still love this series and if I can, I'll collect them all. There are currently 6 books in the series. I particularly love how this strange, otherworldly creature that looks and sometimes behaves like a cat (not a nice cat, but his humans still love him) is contrasted with a totally normal, slightly quirky family who are kind and loving. Also, Raj begins as a bit of a fish out of water in the first book but quickly finds friends and with each book his connections to people in the neighborhood grows. The human side is really quite lovely, although he does have his nemeses in the form of a group of bullies.

Note: I'm trying to get back to pre-posting so that all of my posts are up by 7:10 AM for the early risers who like to read posts before or on their way to work but last night I was thwarted by a power outage. Oh, well. I'll keep working on it.