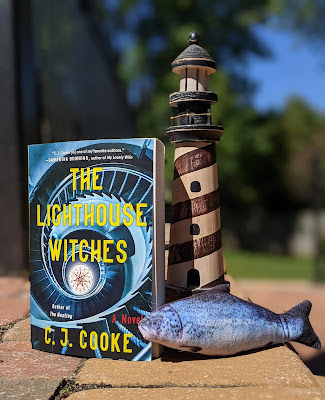 The Lighthouse Witches by C. J. Cooke tells three interconnected stories. In 1998 Liv, a single mother of three, takes an art commission to paint a mural inside a 100-year-old lighthouse on an island in Scotland. Since her husband died, life has been rough and she's barely been able to support her family. But, this job should keep her going for a while.

The lighthouse has a hole that leads to a cave where people accused of witchcraft were tortured in the 17th century; and, superstition on the island runs deep. When a child knocks at her door, has Liv found a wildling? Wildlings are supernatural beings that take the place of children, allegedly due to a curse by the witches who were executed in 1662, and they have been accused of causing the deaths of entire families for centuries.

In 2021, Luna receives a startling call. Back in 1998, her mother Liv and both of her sisters, Clover and Sapphire (Saffy), went missing. Now, Clover has reappeared and Luna is her only known relative. But, when Luna travels to Scotland from her home in Coventry, she is stunned to find that her little sister is the same age she was when she disappeared, rather than a 30-year-old woman. And, she has a mark on her leg that is known to be the mark of the wildling. Is Clover really her sister or a strange being that took her place? Is Luna in danger?

There's also a third storyline that intertwines, but it's a lesser part of the story. In 1998, Saffy has found the grimoire (a book of magic spells, although it reads like a diary) of a man from 1662. Since there's little to do on the island and not a lot of reading material but Saffy is an avid reader, she reads the grimoire. It describes the accusations of witchcraft that took place on the island and the confessions and deaths of the women accused.

Highly recommended - Creepy, atmospheric, fascinating, sometimes a little scary, well-written and very meaningful. I didn't find The Lighthouse Witches extremely scary but there were some violent and disturbing scenes so I was also a bit surprised not to have any nightmares at all while I was reading it. In the end, the really great thing about the book is that it has a very satisfying ending (in my humble opinion) and an exceptional theme, really an indictment of cruel misogyny, the author's point being that the world needs to stop persecuting women for simply existing. I loved the depth of meaning and will be watching for more by this author, for sure.

I did have one issue with the book. The grimoire excerpts read like a contemporary diary to me. In fact, it took me a long time to figure out that that particular storyline took place in 1662 as it lacked a date label, although Saffy may have mentioned it being from that time period. I considered that a minor issue as she did a fantastic job of interconnecting the stories and eventually the time period does become clear, even if the language feels off.

As you can see, I was finally able to take an outdoor photo after a long, hot, wet summer. It's warmed back up but we cooled off for 3 or 4 whole days! Wow, was that fun.