South of the Border, West of the Sun by Haruki Murakami 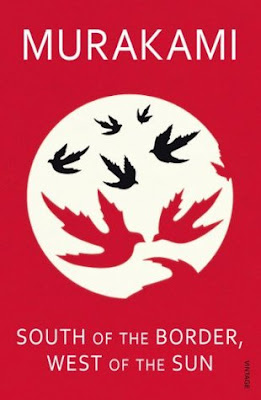 I had mixed feelings about South of the Border, West of the Sun by Haruki Murakami. So mixed, in fact, that I couldn't talk myself into rating it at Goodreads.

South of the Border, West of the Sun is told in first person from the viewpoint of Hajime, an only child who feels out of place until he meets Shimamoto, who is also an only child. They remain playmates and friends for years, till his family moves away and they lose touch. Over the years, Hajime meets (and sleeps with) many women but Shimamoto has a special place in his heart and he even follows a woman who looks like her and has her same limp, at one point. He marries, has two children and his jazz bar becomes a success. He's mostly content.

Then, Shimamoto reappears in his life, having seen an article about his jazz bar. Hajime is every bit as drawn to her as he was when they were young. She is different, more beautiful, no longer limping, and mysterious. There are questions she won't answer, things he doesn't know about her. Will Hajime stay faithful to his wife? Or, will he leave her for Shimamoto?

Meh - I still don't feel like I can rate this book. I found it compelling enough to finish and I think that's mostly down to Murakami's writing. He does know how to suck you in. But, Hajime is kind of a yucky person. He's selfish when it comes to women, taking what he wants from them but giving little in return. You can't really root for him. And, Shimamoto's mysteriousness made her feel more like a vague outline of a character than one with color and depth. She was so incomplete that I closed the book unsure whether she was real or a figment of the main character's imagination.

After a week and the decision that I'm definitely not going to rate the book, what most stands out for me is the feeling I'll forget about it pretty quickly. The one thing I really loved about the book was the use of motifs. But, here I must confess that I didn't know the word "motif" as it relates to literature. I'm probably the last to find out about this but OK. Here's what google told me after I read about the book and the word "motif" came up.

What is a motif in literature?

Motif is a literary technique that consists of a repeated element that has symbolic significance to a literary work. Sometimes a motif is a recurring image. Other times it's a repeated word, phrase, or topic expressed in language.

In South of the Border, West of the Sun, there are a large number of words or motifs that are repeated: rain, the color blue, and looking out at a graveyard are a few I recall. I don't always know what various images stand for in literature (so I often end up looking them up — I looked up crows as a metaphor when they appeared in a particular scene, for example).

This may be simplistic on my part but I'd rather an author show or tell me what he's on about. And, yet, I thought the use of motifs was effective. So, while I didn't love the book, primarily because of Hajime's selfishness, I don't regret having read it. And, good grief, you could spend loads of time reading everyone's analysis of this book.

Some bits of information I found helpful:

The ‘South of the Border’ of the title refers to the popular 1939 song recorded for a film of the same name. As children Hajime and Shimamoto used to listen to a Nat King Cole recording of it (although in reality, Cole never recorded the song). Not knowing it refers to a trip to Mexico, Shimamoto used to wonder about what magical place lay south of the border. “Something beautiful, big and soft”. The ‘West of the Sun’ refers to a form of hysteria Shimamoto says afflicts people living in Siberia, possibly similar to Piblokto, where for no reason they abandon their life in difficult conditions and wander westward, usually dying of exposure.

--from We Need to Talk About Books

"South of the Border", meaning a life of convention, possibility, and ultimately, disappointment, and "West of the Sun", meaning taking a step beyond reason, and in doing so risking everything [...]

Clearly, I'm going to need to read more Murakami. I've mostly read his short stories and nonfiction. I'll try to tackle one of his longer novels when I can fit it in.

Email ThisBlogThis!Share to TwitterShare to FacebookShare to Pinterest
Labels: Haruki Murakami, neither recommended or not recommended, translation, Vintage