Everything I read in February (in brief) 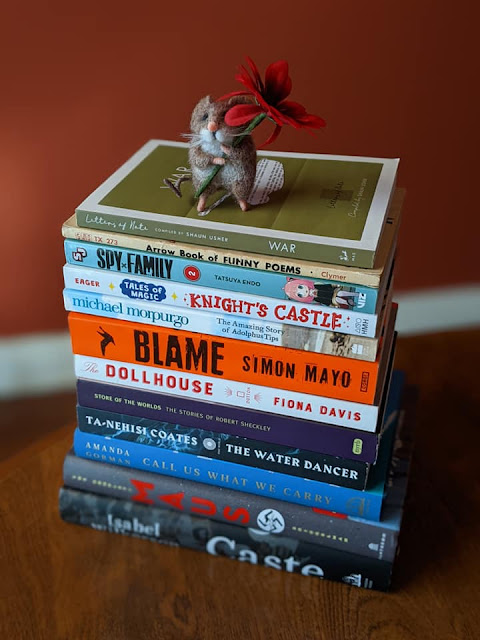 February:
19. Knight's Castle by Edward Eager - A classic English children's book about a boy who is transported through time when he makes a wish while holding a beat-up old toy soldier that has been passed down through generations of his family. He travels back several times with cousins and sibling but his wish can't come true unless he proves himself. Very fun and a bit goofy.
20. Letters of Note: War by Shaun Usher - A collection of letters written either about or during times of war. Some are funny or fascinating or horrifying. One moved me to tears.
21. The Complete Maus by Art Spiegelman - This seems to be my year for reading banned books. I bought The Complete Maus after hearing a Tennessee school board had removed it from their curriculum for spurious reasons. An important book that brings up lots of discussion-worthy topics, not just the Holocaust (although that's what it's mainly about and the graphic novel presentation is an excellent way to show its horrors) but also suicide and difficult relationships between parent and child.
22. Call Us What We Carry by Amanda Gorman - A collection by the poet who became famous for her poem at President Biden's inauguration (included in the book). I felt like she was at her best when describing the frustration and pain of being Black. But, in general, I struggled with this particular collection and felt like it would have been better on audio. Even the inauguration poem, which I loved when she read it, left me flat. So, clearly I needed to hear it read.
23. Store of the Worlds by Robert Sheckley - A collection of short stories that are satirical, humorous, off-beat, absurdist . . . and mostly sci-fi. This is a 5-start collection that I'm certain I will return to.
24. The Arrow Book of Funny Poems, collected by Eleanor Clymer - A very silly book of poetry from my childhood, reread to see if it still holds up. Yes, it's every bit as goofy and fun as it ever was.
25. Spy x Family #2: Mission Start by Tatsuya Endo - The first Spy x Family graphic novel was set-up. The second shows the characters in action, although not successfully. I am absolutely loving this series.
26. The Amazing Story of Adolphus Tips by Michael Morpurgo - Based on real events from WWII. When families along the English Coast have to leave their homes so that soldiers can practice beach landings and a cat is left behind, the main character keeps slipping back into the danger zone to search for her. The MC is unlikeable, at first, but softens up so I ended up enjoying this middle grade story.
27. The Water Dancer by Ta-Nehisi Coates - The story of a slave in the American South (he refers to fellow slaves as "the tasked") who discovers he has a special ability and becomes involved in the Underground Railroad. I liked this book mostly for the vivid portrayal of the horrors of slavery. I was less enamored with the magical realism, which I thought detracted from the theme that no man should be slave to any other.
28. The Dollhouse by Fiona Davis  - A contemporary/historical novel about women living in the Barbizon Women's Hotel in the 1950s and a modern journalist who is determined to tell the story of those who stayed for decades and were grandfathered in when the building went condo. A bit contrived, as a friend said, but I still eventually became swept up in the story and enjoyed it.
29. Caste by Isabel Wilkerson - Nonfiction about the American caste system that puts Blacks firmly at the bottom, the structure that has kept them from thriving, and the recent rise of white supremacism, thoroughly researched. By far one of the most important books I've read. I've recently seen Caste on a banned book list. There can only be one reason to ban this book: someone doesn't like what it says. But, there's no disputing the depth of research involved. Fascinating, infuriating, discussion-worthy.
30. Blame by Simon Mayo - An unusual dystopian YA in which families are imprisoned for the crimes of their parents and a teenager who is determined to break herself and her family out of the prison in which they are cruelly held with a band attached to their spine that identifies them as people who are held for "heritage crimes". Quite a rollercoaster ride, as all of the books I've read by Mayo have been.