The Complete Maus by Art Spiegelman 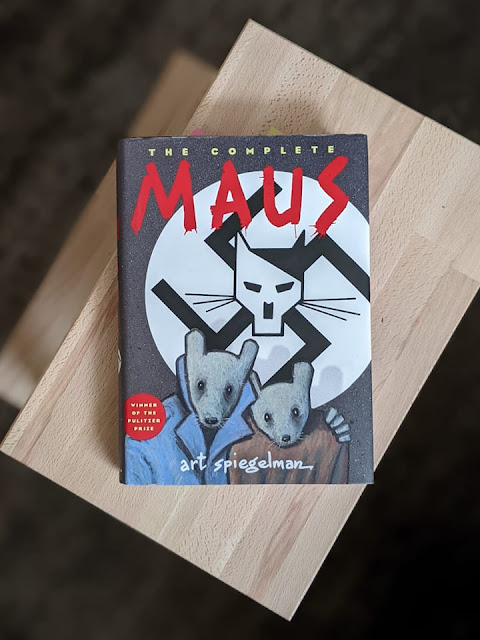 I bought a copy of The Complete Maus by Art Spiegelman (both the Pulitzer-winning original and the follow-up in one volume) after reading about Maus's removal from a curriculum in Tennessee. I'm sure you've all heard about that if you're in the US. I've had it on my wishlist for years and at one point actually owned a copy of the original with a cover that was falling off but got rid of it without reading it during one of my book purges. At the time, I didn't know what it was about; I'd bought it used on a whim when I'd never read any graphic novels or biographies, probably out of curiosity. Then, I didn't get around to reading it.

For those who don't know, Maus I: A Survivor's Tale is a graphic memoir about author and artist Art Spiegelman's parents' experiences leading up to and during WWII and the author's difficult relationship with his father. Art Spiegelman's father was a Polish Jew. Maus I first tells the story of how his parents met, married, and started a family as Hitler was coming into power. During the early years of the war, Art's parents either managed to find jobs, hide, or escape arrest numerous times but had many harrowing close calls. The book goes back and forth between Vladek Spiegelman's experiences and Art's determined effort to get the full story of what happened to his family, including a brother who died during the war, out of his father and try to locate his mother's diaries.

The second book, Maus II, describes his father's experiences in a concentration camp after he and his wife were imprisoned and separated. Again, it goes back and forth in time as the author deals with his difficult father and gradually learns the complete story.

I chose to buy The Complete Maus so I could judge its merits for myself after reading that the Tennessee school board members had complained about nudity, violence, and profanity in the book. My questions were, "How much nudity and profanity are there in the book(s)? Is anything portrayed genuinely offensive or is the storyline important enough to negate any negative aspects?"

First of all, you must know that we're talking about people portrayed as mice (Jews), cats (Nazis), and other animals (pigs were, I think, Poles who were not Jewish, but I'm not certain), except when he portrays his mother's suicide. In that case, he reverted to human images and showed a partial image of his mother's naked body in the bathtub, where she took her life. I counted a total of 7 instances in which profanity was used, all of which are words heard regularly on TV. When the Jews were forced to stand around naked, you do see tiny little man parts on the mouse bodies. And, yes, there are images of legs and feet when Nazis hanged Jews, either as punishment or for sport. All of this is less offensive than the factual horror of what the Nazis did, of course. Who cares about a few bad words and a little nudity when Maus has, as teachers say, told the historical truth of Nazi cruelty effectively?

Highly recommended - There is nothing in The Complete Maus that kids today haven't seen when it comes to the items school board members in Tennessee found offensive, and Maus is an important book, one that not only describes the Holocaust and its horrors but also portrays a difficult relationship between father and son that likely has made a lot of people with equally difficult relationships feel a little less alone. Suicide is a third topic that is addressed, although only marginally as his father describes his mother's battle with recurring depression that first began as postpartum depression.