Sisters of Night and Fog by Erika Robuck 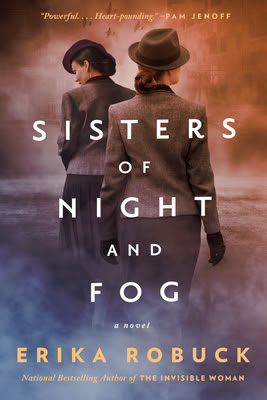 Violette is young, energetic, athletic, and smart. She is also half-British, half-French and staying with her aunt in France as the country is invaded during WWII. Quickly hustled away with her younger brother, she vows to return to France but her life is complicated. When she finally gets the chance to return with the Special Operations Executive, parachuting into France to help out with the Resistance, she is thrilled but knows that it means her child may grow up without a mother.

Virginia is an American married to a Frenchman and living in France. When the country is invaded and then occupied, she could easily escape to Florida and sit out the war. But, she won't even entertain the idea. Philippe is everything to her. When Virginia and Philippe realize they can help with the Resistance by working to house soldiers who have been shot down or escaped from Germans, they are happy to have the chance to do their part.

Although they have very different lives, the two women cross paths when they're caught and imprisoned. But, will their fates be the same?

If you hang around here much, you might recall that I took a writing workshop in August of last year and Erika Robuck was one of the guest speakers. She talked a little about Sisters of Night and Fog, at the time, although I don't think it had an official title, yet. The Invisible Woman (link leads to my review) was either about to be released or just had been and she talked about how she discovered the stories of Violette and Virginia during her research about Virginia Hall for The Invisible Woman.

Although much of Sisters of Night and Fog has been fictionalized to fill in the gaps, their general storyline is based on the true stories of these remarkable women who risked their lives to fight the Nazis.

I had trouble getting into the story, initially, but it was my problem, not an issue with the book. I wasn't in the mood to have my heart broken and a little piece of your heart is always shattered when you read about WWII. There was so much cruelty. But, there was a great deal of heroism, as well. and Sisters of Night and Fog is absolutely a story of women willing to lay down their lives in the service of others.

Highly recommended - I can't say much more without giving away plot points and details that are best revealed slowly but while Sisters of Night and Fog is definitely heartbreaking, it is also uplifting and awe-inspiring to read about the courage of these two women and the people they worked with. I recommend reading it during a time when you're feeling like you can handle intrigue, tension, danger, and sadness. I was fighting depression hard this entire month (improving, now) so I kept picking the book up and setting it aside to read lighter fare but when I finally felt up to it, it was difficult to put down.

I have a feeling Violette and Virginia will stick with me for a long time and I'd like to read more about them. Obviously meticulously researched and another beautifully written book by Erika Robuck, if a tiny bit overlong. Be aware that the book tells their stories from the beginning of the war to the end and their work was later in the war, so much of Sisters of Night and Fog feels like backstory if you're expecting to jump right into the action, as I was. Initially, I thought the book started too far back in time but I trusted the author's timing and it turned out that you really do need to understand where they came from.