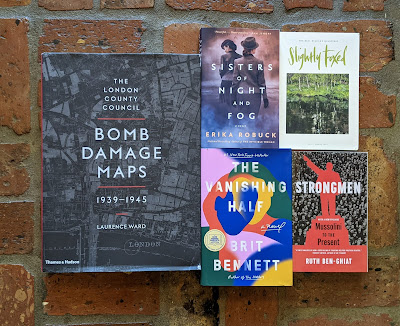 OK, yes, I broke my book-buying ban, again. But, I'm back on the proverbial horse.

At least I've been reading (if not posting about books). And, all of these were enjoyable, although I don't think any got 5 stars, except maybe The Poppy Factory.

I have some other bookmarks in books but this is the only one I'm currently reading. I started Sisters of Night and Fog and realized I needed to set it aside briefly but plan to read it next. I can't recall why; it's already shaping up to be an excellent read but perhaps it was too heavy for a day in which I was sobbing harder than usual over the bombings. I'll start over from the beginning when I read it, probably tomorrow.

Black Brother, Black Brother is going to be a quick read. The main character is a 7th grader so I'm not exactly sure how to classify it. 7th grade is a bit too old for middle grade, but it doesn't quite feel like a YA, either. Maybe YA Lite. Regardless, I'm enjoying it for the way the main character has chosen to stand up for himself by challenging himself physically rather than lashing out at anyone.

Last week was one of those weeks that I tried to write a review and stared at the screen for hours. That was Monday. On Tuesday, I sat down to try again and found myself still unable to write. So, I walked away from the computer for a week. I've periodically checked email but just realized that I haven't even done that for at least 3 days. So, that's why there were no blog posts, last week, not even a Fiona Friday. In fact, I might have put up a Fiona Friday photo if I hadn't been hauling a cat to the vet. Isabel is still on antibiotics after a month, still twitching, but we haven't done follow-up blood work, yet, or further testing. Two more weeks till her next visit (approximately — since going to the vet means I have to catch her and she is too clever for her own good).

I'm on Season 3 of Chicago Fire. I don't know why that show is able to serve as my escapist bolt hole, but it is. When the news is unbearable, I turn on another episode of Chicago Fire. My husband can't bear to watch it. "It's so stupid," he says. To that, I have to say . . . well, yeah. Maybe that's why it's so great for escapism. I've noticed something interesting about the show that I never noticed when watching it every week or so (I'm not good at tuning in at the right time for anything, unfortunately, so I've never seen it regularly for an entire season). They have a tendency to run a storyline for a few episodes and then just drop it with no mention ever again. For example, Shay decided she wanted to have a baby, talked her dad into paying for in-vitro treatment, and went through with it. That took several episodes. Then, she found it out didn't take, was envious of the pregnant girlfriend of her best buddy for a short time and . . . nothing. It was never again mentioned. That happens a lot and once you've noticed, it's hard not to keep a running list of all the abandoned storylines, but I don't care. It's a bit of a soap opera, typically, and while it'll never quite be the joyful viewing that Emergency! was, I still love it.

I'm also on the third season of Being Erica and it's taken an unusual turn, this season. Otherwise, it's all been news of Ukraine and I confess that there have been only a couple of news reports that didn't have me in tears. I've read comments to that effect from other people on social media, along with the fact that people feel similarly helpless watching an entire country being heartlessly bombed. At the same time, my admiration for Ukrainians is unbounded. What an amazingly strong, resilient, hopeful people. I want to be as tough as a Ukrainian. But, mostly, I want Putin defeated so they can go home in peace and rebuild their country.