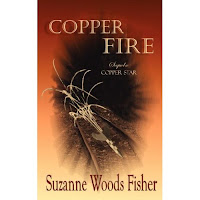 What led you to pick up this book? I chose to read this book for a book tour because the excerpt was excellent and the setting was post-WWII. I'll read just about anything that has to do with the Second World War.

Summarize the plot but don't give away the ending. Louisa Gordon has settled into her home and life in Copper Springs, Arizona when a telegram from the International Red Cross arrives. Her young cousin, Elisabeth, has been released from Dachau concentration camp and Louisa is her only remaining relative.

Louisa is determined to bring her cousin home and, at the same time, discover the whereabouts of Friedrich Mueller, a Nazi sympathizer who brought death and financial ruin to Copper Springs. But, the last thing she expects is to meet the former love of her life, a man she cannot even bear to think about.

Note: This book is "inspirational", aka Christian fiction, although I think it's subtle. In fact, I completely forgot that it could be considered Christian, in spite of the fact that a minister is a key character. I saw the Christianity as a function of the time and place. Louisa is half Jewish and Elisabeth is a Jew, hence her imprisonment in Dachau.

What did you like most about the book? I enjoyed the fact that Louisa's family slowly grew, throughout the book, till it was a bit of a patchwork quilt of characters. I also thought it was a very readable book, with fluid prose. I found the story a bit of a page-turner.

What did you think of the characters? My favorite characters were Aunt Martha (Louisa's husband's sharp-tongued live-in aunt) and Louisa's stepson, William, who is extremely observant and wise in the way of a child who sees and states the facts. Louisa is a former German Resistance Worker and I felt like I personally needed to read the first book, Copper Star, to get a grip on how and why she ended up in Copper Springs, married to a minister. She never really grew on me, although I liked her and was interested in finding out what was going to happen to her. Elisabeth was extremely difficult as a character because she wasn't happy to have a warm, clean home to live in; she was very angry. I did not like the fact that Elisabeth's dialogue was written in vernacular (German-accented English), so that every "w" was written as a "v". That became really tiresome, after a time. But, at the same time, Elisabeth's behavior was well enough explained to make sense and I cared about her.

Share a favorite scene from the book: There isn't a particular scene that jumps out at me, but I particularly liked the action near the end of the book, when pieces of the Friedrich Mueller puzzle fall into place.

Recommended for those who are looking for an interesting story of small-town life after WWII, with a bit of intrigue.

In general, I'd call the writing "a bit pedestrian". There are no beautiful word pictures, no flowery prose. I didn't mark any passages that stood out. But, it has a good flow and, while I thought there were a couple of tiny snafus (a baby that is handed to the father who is already, in fact, holding the child), I enjoyed reading it and would like to get a copy of the first in the series to fill in a few of the bits I didn't quite understand -- probably due more to fatigue from commuting within Oklahoma, as opposed to any flaw on the author's part. I would definitely like to read the next in the series, when it's released.
Posted by Bookfool at 9:16 AM